by Erika Iouriev and Sarah Tallents

Even with the cold weather, many gardeners are itching to get back into their gardens. Luckily, winter is the perfect time to weed out certain invasive plants. According to the USDA, invasive plants are plants that are “non-native to the ecosystem under consideration and whose introduction causes or is likely to cause economic or environmental harm or harm to human health.” There are close to 500 species of invasive plants recorded in Delaware alone and many are planted in yards and landscapes. If not controlled, these introduced plants can escape cultivation and infest our natural areas, choking out native plants. Ultimately, this can lead to loss of biodiversity, habitats, and eventually extinction. In a win for conservation, recent legislation in Delaware has outlawed more than three dozen plants from being sold at nurseries.

While your garden is resting for the winter, seize this opportunity to manage the invasive plants on your property. When deciduous leaves have fallen, it is easier to find, access, and remove invasive plants. Keep reading to learn about three common invasive perennial vines that can easily be identified in winter and steps the average homeowner can take to regain control and prevent their spread.

Hedera helix, commonly known as English ivy, is an aggressive evergreen perennial that is commonly grown as a vine or groundcover. Native to Europe, it was brought to North America by colonists in the 1700s. In its juvenile, or spreading phase, it has three to five  lobed dark green leaves and can root into the ground, bark of a tree, or a building. In the adult phase, the leaves become heart-shaped and the vine produces small white flowers followed by blue-black berries in the fall. Tolerant to drought, full sun or shade, this invasive plant can quickly take over a forest or roadside. 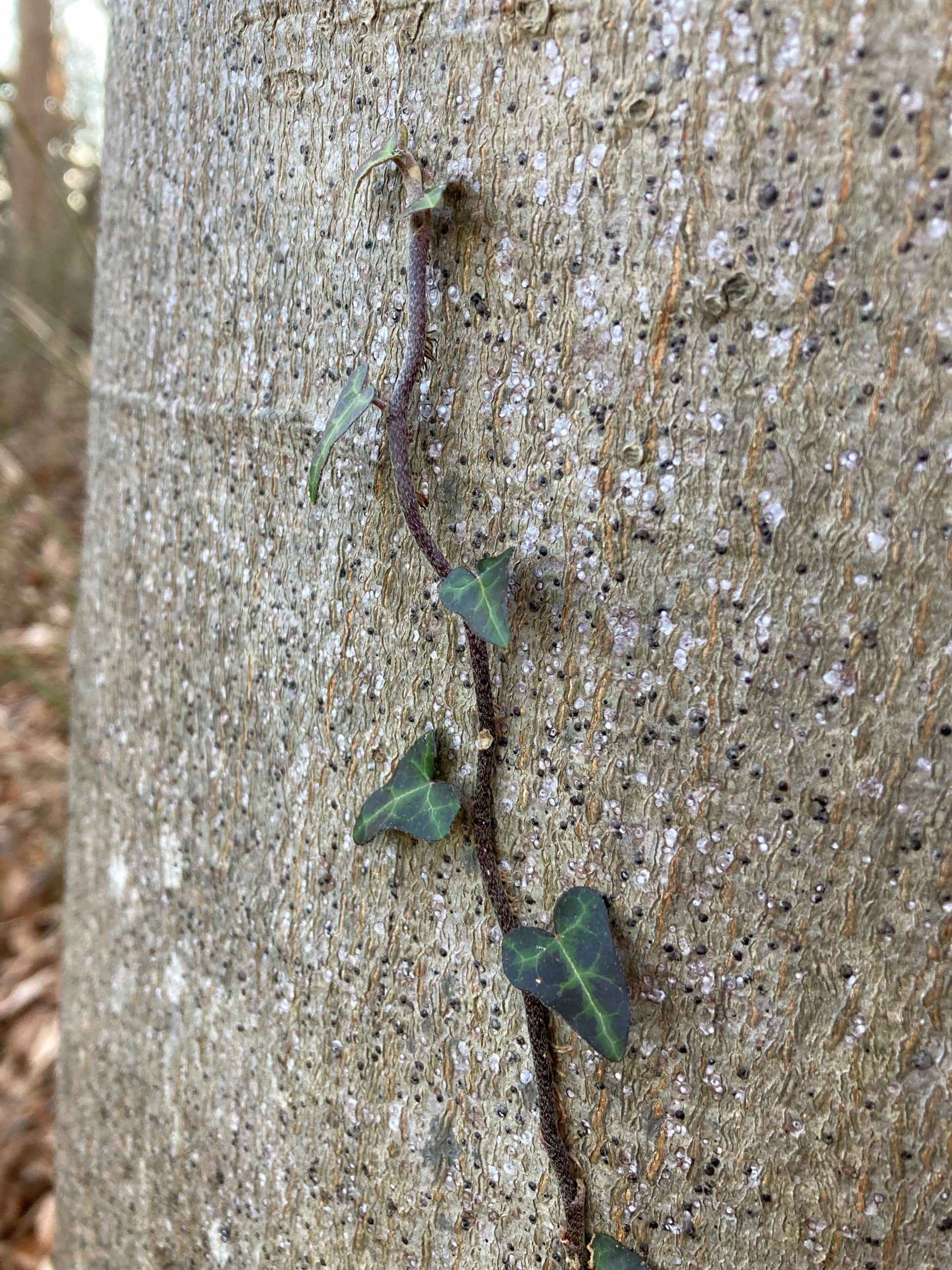 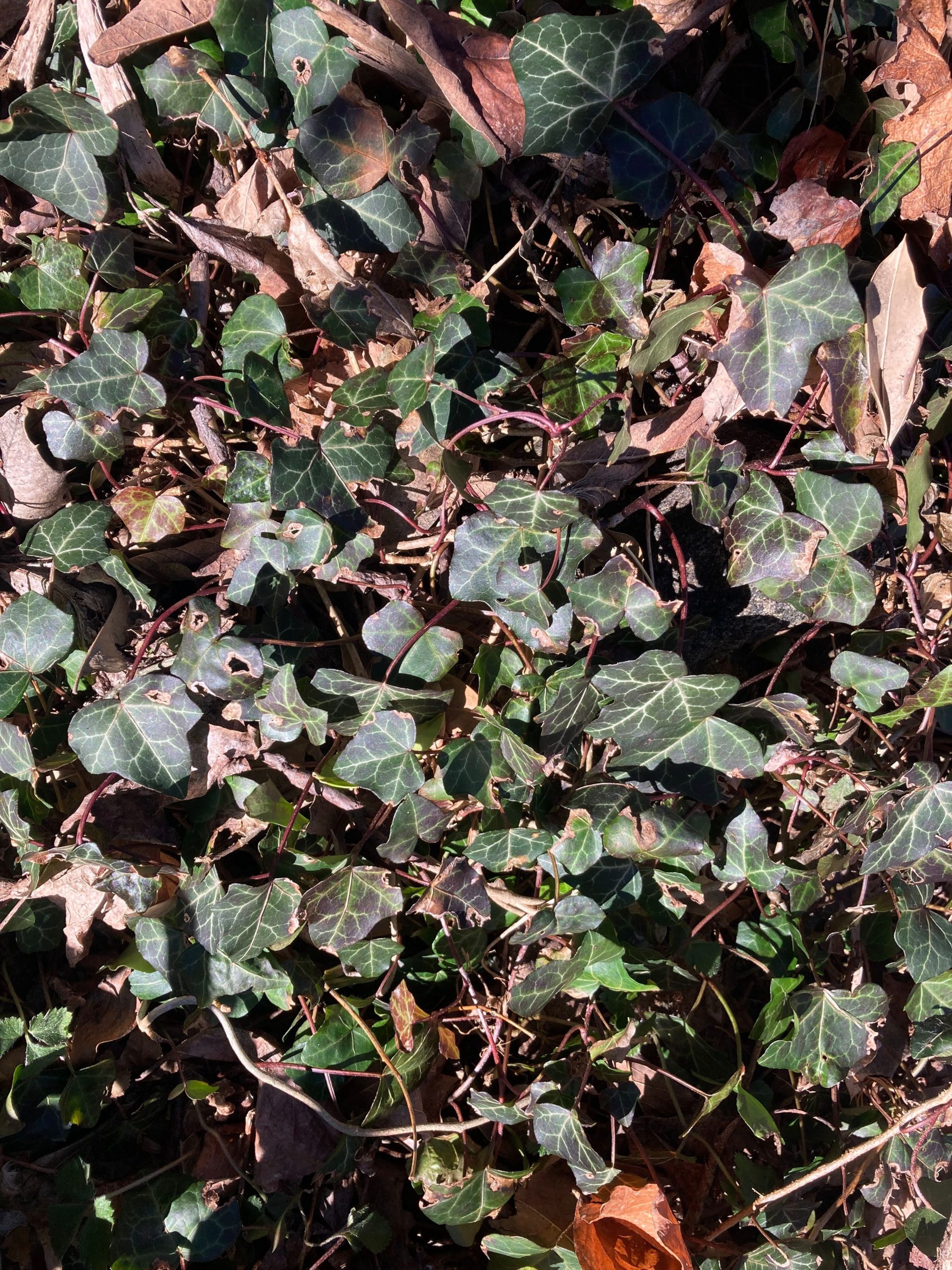 To control the spread of English ivy, flowers or berries can be clipped off before going to seed. If the vine is climbing up a tree or structure, a gap cut can be made to kill the above-ground portion of the vine. Once the ground has thawed in the spring, any seedlings or root that has re-sprouted from the base can be pulled or dug from the soil. Keep checking the area periodically to remove any sprout before they take off and be sure to dispose of them so they do not take root in your compost pile. 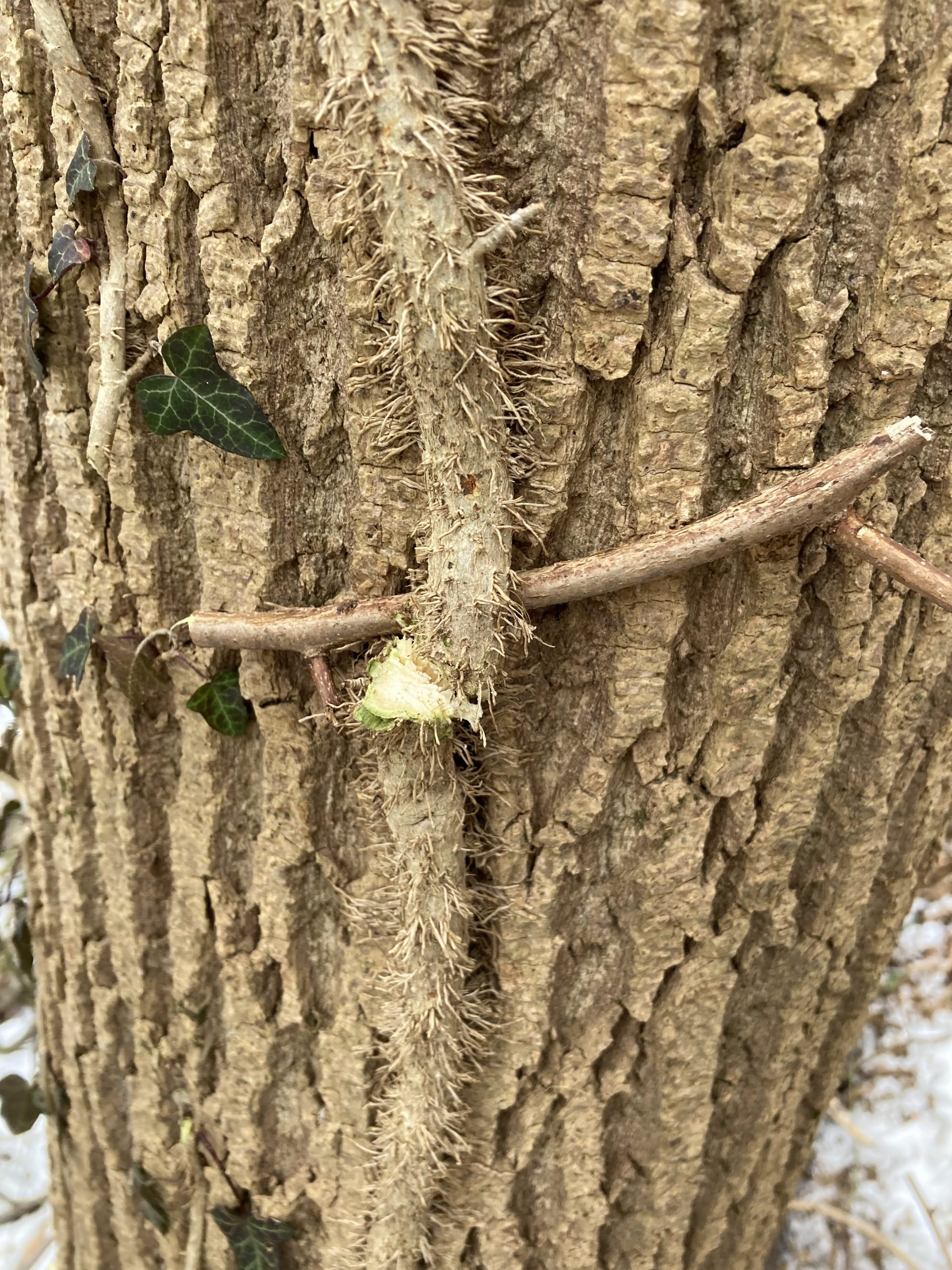 Japanese honeysuckle, Lonicera japonica, was introduced in 1806 as an ornamental plant that also helped with erosion control. It is an aggressive, semi-evergreen woody vine that prefers full sun but is shade-tolerant and grows in a variety of habitats, including woodlands, wetlands, and disturbed areas. Young stems are green while adult stems are woody and brown with peeling bark. Leaves are opposite and separate (unlike native honeysuckles which have fused leaves), with two leaves per node. Flowers are white, fading to yellow and the berries are shiny and black (berries of native honeysuckle are red to orange). ​​

Japanese honeysuckle creates dense thickets by vigorous branching, rooting at the nodes, and vegetative spread through underground rhizomes. The seeds are also spread by birds. The dense growth blocks sunlight, prevents germination, and can eventually kill native ground-level vegetation. Homeowners can control Japanese honeysuckle by preventing it from going to seed, pulling or digging all roots from the ground, and cutting established plants repeatedly to starve the root system of nutrients needed for growth. 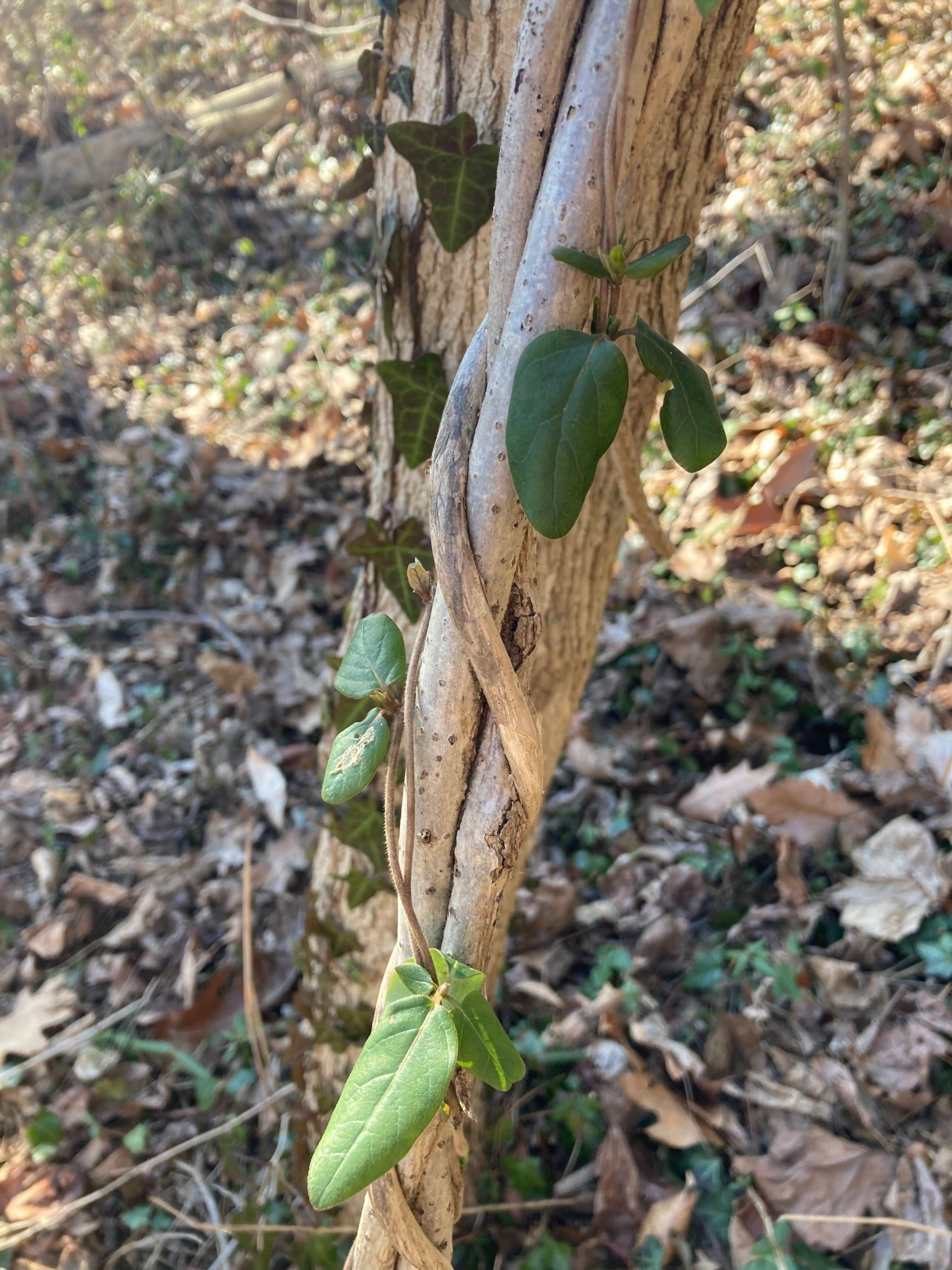 Wintercreeper, or Euonymus fortunei, was introduced from Asia in 1907 for use as an ornamental ground cover, although it can also grow as a climbing vine or sprawling shrub. It is evergreen and has opposite, egg-shaped leaves, which have finely toothed or wavy margins. The fruit are pinkish red capsules that open to show orange seeds. This species has become invasive in most of the eastern half of the U.S. where it finds opportunities to invade forest openings caused by wind, insects, or fire damage. It spreads vegetatively and by seed so be sure to pull or dig up the plant in its entirety and dispose of it properly by putting it in a trash bag or high heat compost so they do not take root. 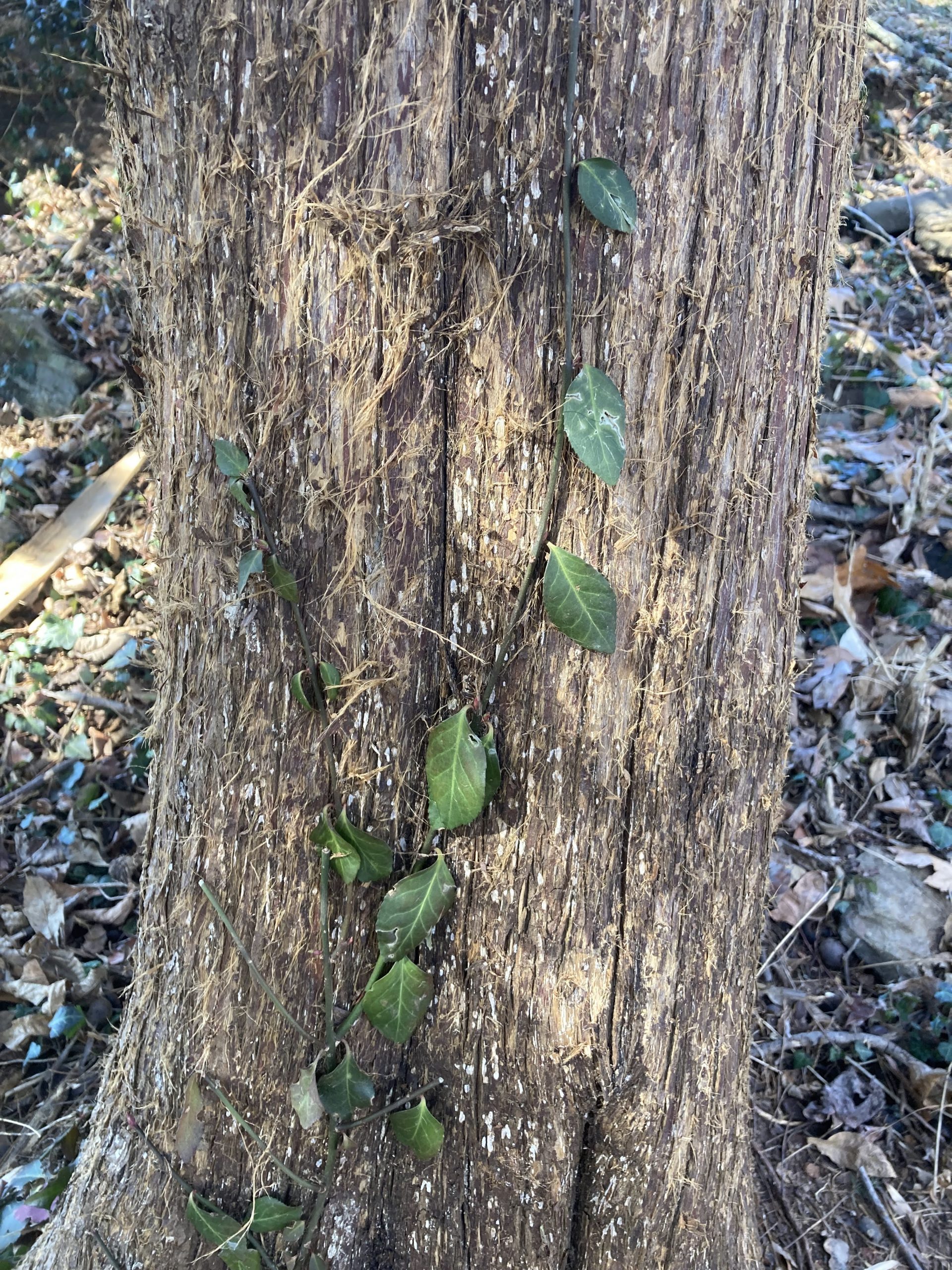 After removing these invasive vines you may want to plant native alternatives. Below is a list of natives you can plant instead:

Mt. Cuba Center works to control invasives in all areas of the gardens and natural lands by hand pulling first or digging and using chemical herbicides as a last resort. This fulfills our mission of preserving native plants by protecting them from competition by these aggressive spreaders.

To learn more about invasive plant management check out this article: How to Get Rid of Invasive Plants or sign up for one of Mt. Cuba’s upcoming classes on March 11, 2022, Friend or Foe.