HOCKESSIN, Del. (April 20, 2017) – With warmer weather, sunny days and spring flowers comes the hum of pollinators, especially the buzz of bumblebees emerging from their winter burrows.

One bee you’re unlikely to see this spring is the rusty patched bumblebee. Known as Bombus affinis, the rusty patched bumblebee was listed as an endangered species earlier this year by the U.S. Fish and Wildlife Service, the first bumblebee to be listed as such. Once found in 28 states, this bumblebee—named for an orange patch on its abdomen—has seen its populations decrease by about 87% in just a couple decades, according to the U.S. Fish and Wildlife Service. 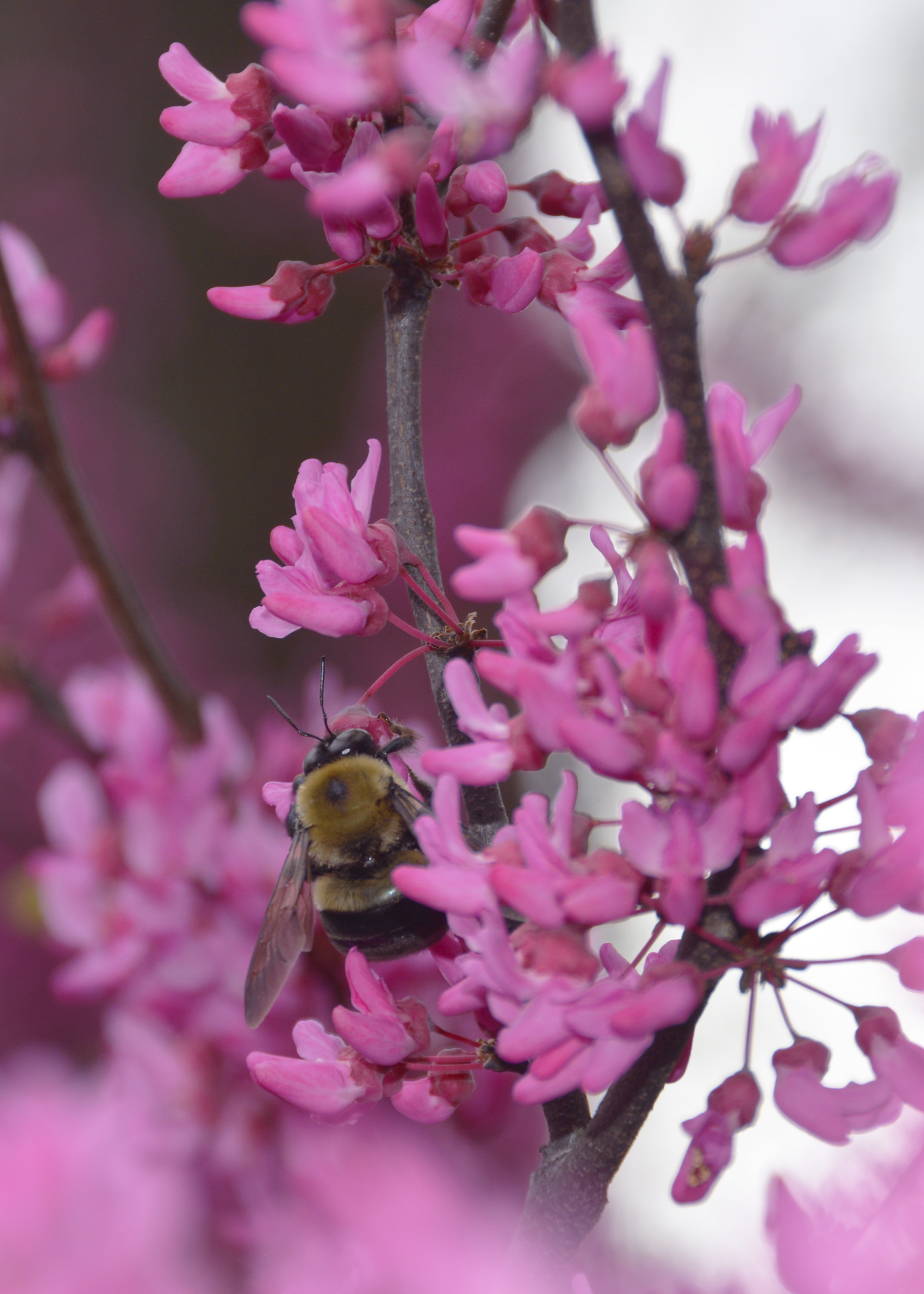 “This range retraction and the limited populations of rusty patched bumblebee made a good argument for the listing,” said Kelly Gill, Pollinator Conservation Specialist for the Mid-Atlantic and Northeast with the Xerces Society. The rusty patched bumblebee used to be so prominent that it was rarely studied, and it’s time to fill the gaps in knowledge, said Gill. “We had to go back through museum collections in order to study its historical range. Not much is known.”

Native bees like the rusty patched bumblebee are responsible for pollinating one third of our food supply—an economic impact of more than $3 billion each year. This bumblebee is active in the landscape from early April, when queen bees emerge and begin to forage for pollen and nectar to build a new colony, all the way through September, when new queens must store up energy to hibernate.

Queen bumblebees are strong enough to pry apart the petals of baptisia and access the nectar inside.

Native pollinators, like the 47 kinds of bees native to North America, rely on the diversity of native plants with which they’ve co-evolved to form special, beneficial relationships. Both these pollinators and the plants they pollinate are specially adapted to local habitats.

While the rusty patched bumblebee is the only bee in the continental United States to be officially listed as endangered, the relationships native bees have with the environment are fragile and can be easily disrupted by habitat loss and use of chemicals.

“In this area you’re likely to see Bombus impatiens and Bombus bimaculatus,” said Dr. Deborah Delaney, professor of entomology at University of Delaware. “These bumblebees emerge early in the spring as soon as temperatures start to increase, and will go to anything that is in bloom.”

In early spring, queen bees emerge from their winter hibernation. The queen bee is the only one to survive the winter, and she must collect nectar and pollen to hatch a new colony of bees. Spring ephemerals, which grow, bloom, and die back to the ground before leaves appear on the trees, are crucial to these bees. Easy-to-spot spring ephemerals include Virginia bluebells (Mertensia virginica), trilliums, Dutchman’s-breeches (Dicentra cucullaria), and Virginia spring-beauty (Claytonia virginica). 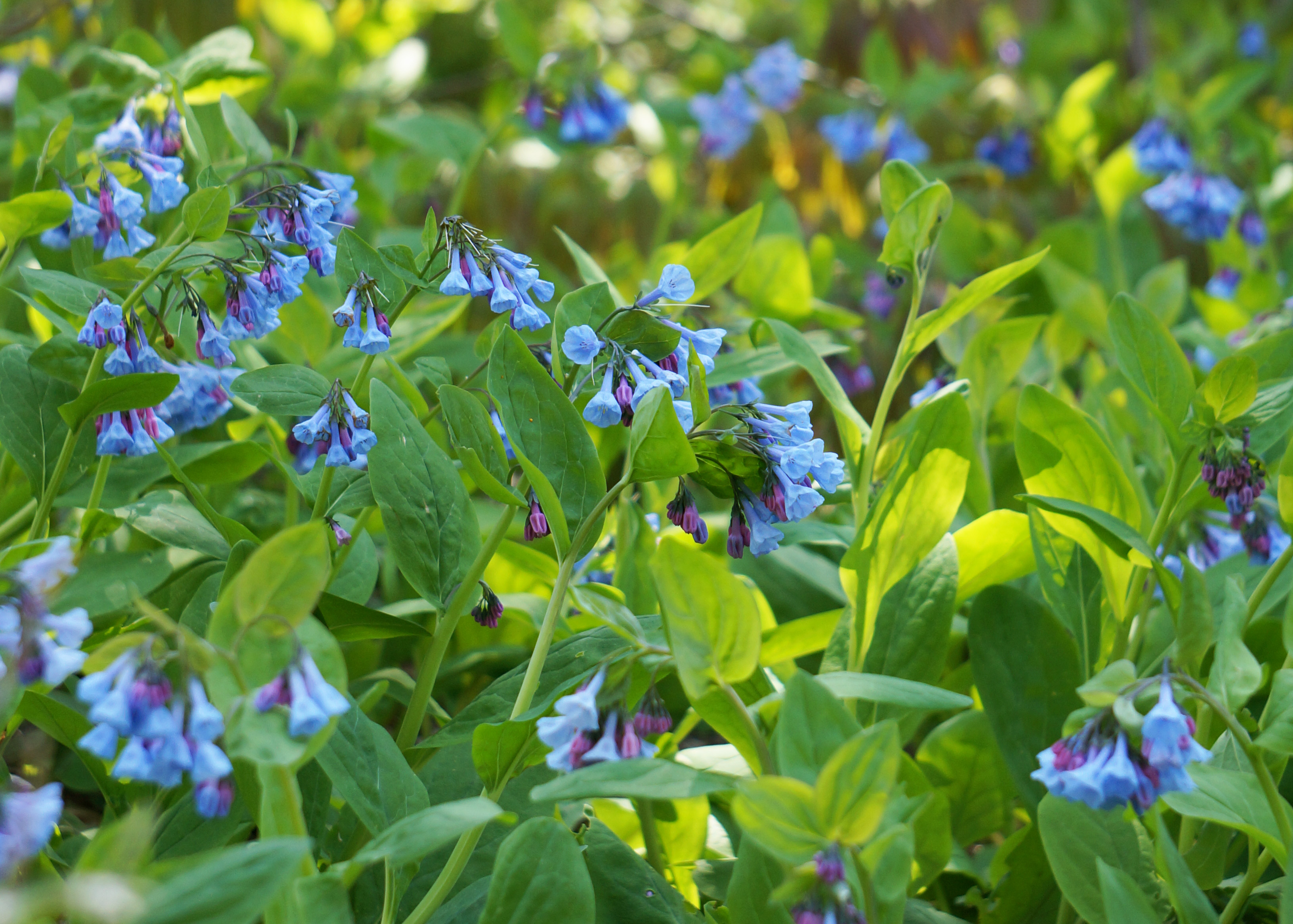 A drift of Virginia bluebells at Mt. Cuba Center.

Some plants are important because of their abundance, like Virginia bluebells. These spring ephemerals bearing blue, bell-shaped flowers provide forage–or, food–for many species of bees and because they occur in such large colonies, are a crucial spring pollinator plant.

Other plants are important because of their exclusive relationships with bees. While most bees are generalists, meaning they can consume nectar of anything that’s in bloom, some rely on a single species of plant. The adrenid bee (Adrena erigenia, sometimes referred to as a miner bee) feeds exclusively on the flowers of Virginia spring-beauty (Claytonia virginica). This solitary bee emerges at the same time the flowers bloom, and collects the plant’s pollen which it rolls into a waxy ball inside its burrow. On top of this miniscule ball of wax and pollen, the queen bee lays a single egg. When the egg hatches, the larva consumes the pollen until it grows into an adult. 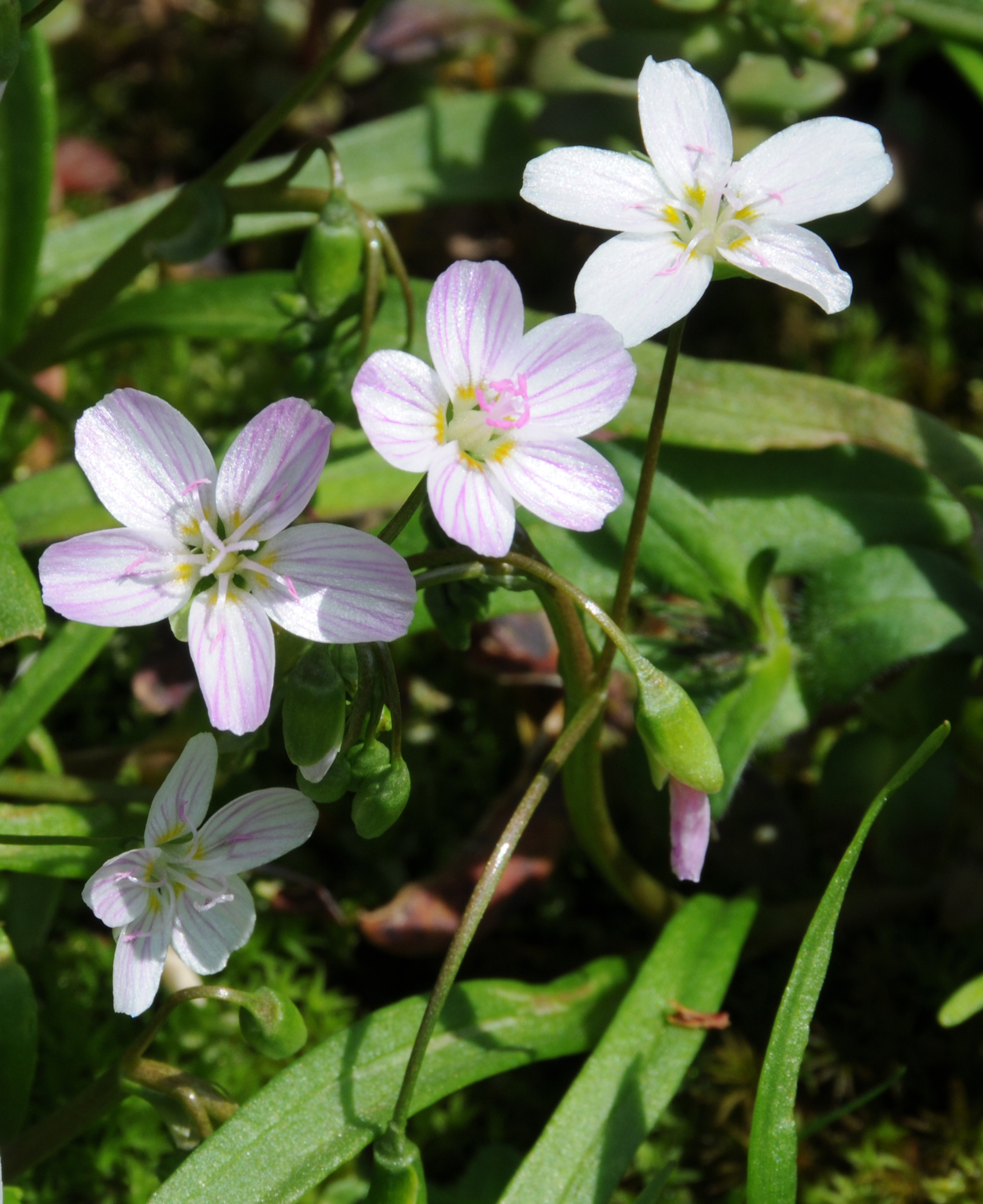 “The bumblebee lands on the flower and vibrates,” Delaney said. “This sonication causes a pollen release from the flower.” Only bumblebees can perform this act, and it’s required in order to pollinate flowers of plants like blueberries, cranberries, squashes and tomatoes.

Be careful not to confuse native bees with honey bees, which come from Eurasia. While honeybees are important for agriculture and provide much of our food, they are not native. However, they feed from many of the same flowers as our native bees.

What you can do

“The best thing an average citizen can do to help bees is plant good forage,” Delaney said. “Bumblebees are generalists, so plant multiple good flowering plants.”

Start by planting a variety of native plants that will provide something in bloom all season long, especially in spring and fall, when forage can be scarce. Even keeping a single native plant in a container, for those gardening in small spaces, will help. Some native plants that flower in springtime and perform well in container gardens are Phlox subulata, or moss phlox, which blooms in early spring in a variety of colors, Luxuriant wild bleeding heart (Dicentra eximia ‘Luxuriant’), and Forever Purple alumroot (Heuchera ‘Forever Purple’). 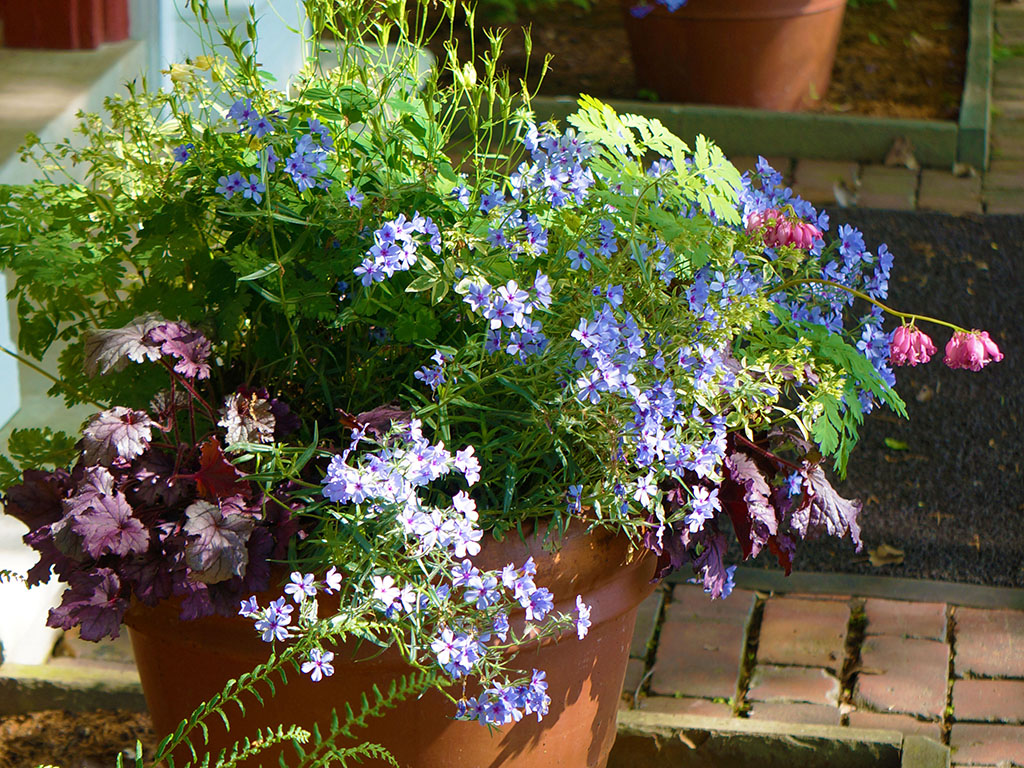 “There’s no one silver bullet to fix this problem,” Gill said. A combination of efforts will help to give native bees–and other pollinators–a boost. Just as important as planting native plants is removing invasive plants which crowd out native plants and can disrupt ecological relationships. For example, garlic mustard, an exotic invasive, blooms earlier than the native cut-leaf toothwort (Cardamine concatenata) and secretes a chemical through its roots that prevents other nearby plants from growing. It also has similar chemical compounds to cut-leaf toothwort, but is toxic to the insects that mistakenly nest on it. 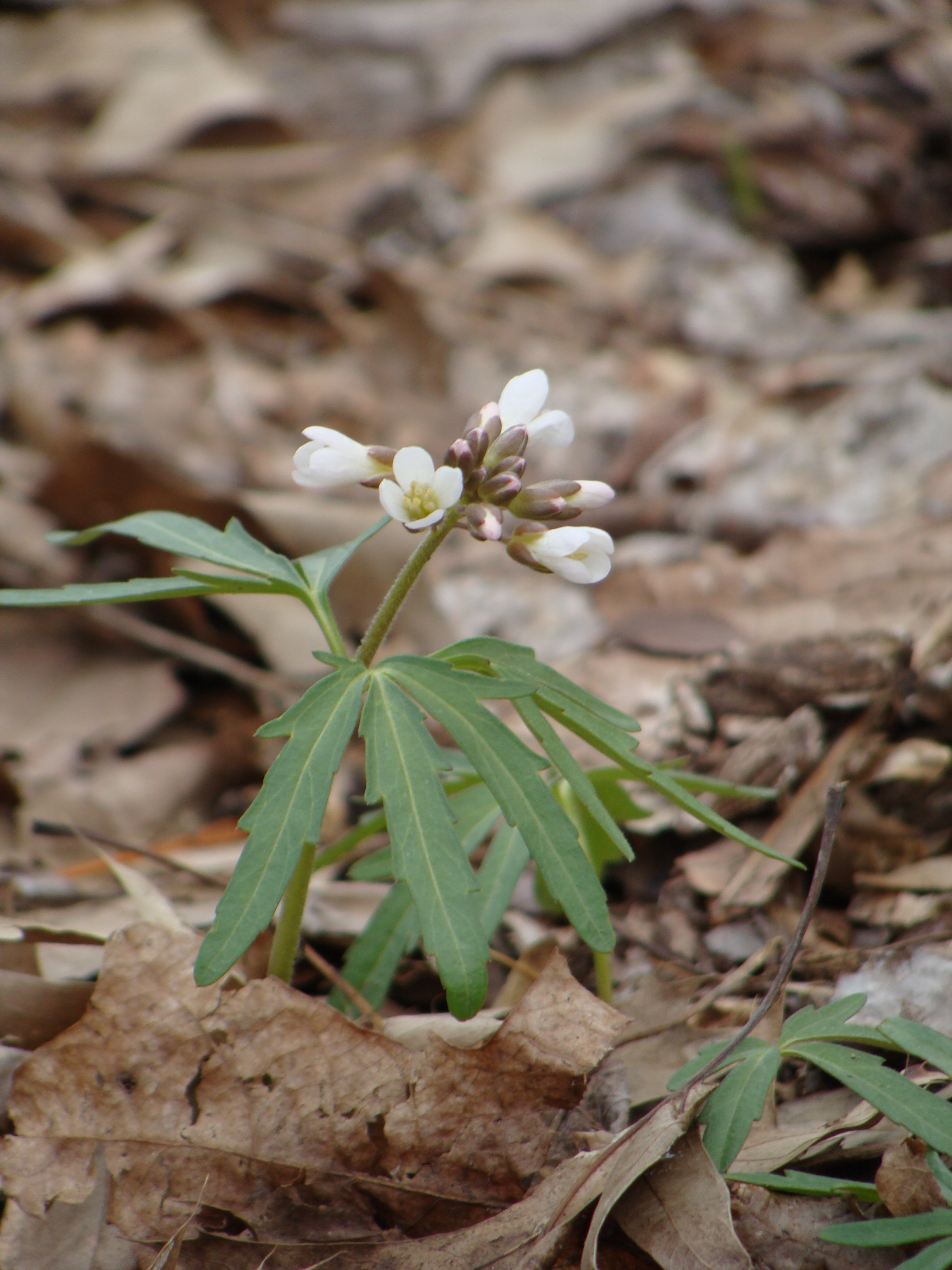 Reduce or eliminate pesticide and herbicide use. Bees can absorb these chemicals through their exoskeletons and the pollen they ingest. Lastly, if you do think you’ve spotted a rusty patched bumblebee, consult a professional.

“If someone thinks they’ve seen the bee, get an expert to verify that the species is present,” Gill said. “And be careful about making changes to its habitat. Even good actions can cause unintended harm.”

For more resources on gardening for wildlife, visit our LibGuide, here.

This article originally appeared in the News Journal on April 20, 2017.