Did you know that native plants play a vital role in coastal ecosystems? Uniquely situated to support shorebirds and waterfowl, the Delmarva Peninsula provides copious habitat for avian life including migratory and threatened species. Join Mike Hudson on a deep dive into the relationship between native plants and avian life along the Delmarva coast.

Mike Hudson is the vice president of the Delaware Ornithological Society and former editor of North American Birds. He is an eBird reviewer in Delaware and has worked as a field biologist and science educator.

Read below as Mike shares the spectacle of shorebirds along the Delaware Bayshore and the Atlantic Ocean. Then register to take his class “Shorebirds: Avian Life on the Delmarva Coast” offered online on July 24 from 1 to 2:30 pm. 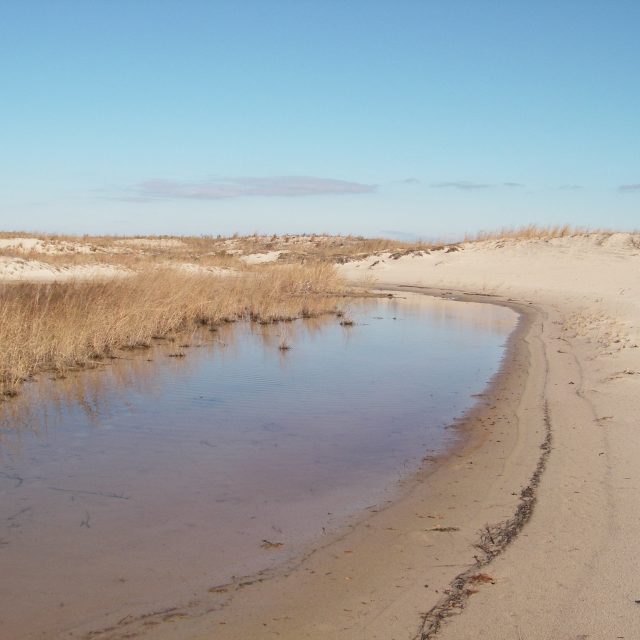 What makes the Delmarva Coast such a unique location for shorebirds?

Mike Hudson: The Delmarva Peninsula has a lot going for it when it comes to shorebirds (and birds in general!). The Delmarva is situated between two large, tidal bodies, the Chesapeake and Delaware bays, so perhaps one of the biggest factors is simply the amount of available habitat, especially wetland habitat. Most shorebirds require large expanses with extensive shallow water and abundant shoreline and we have plenty of that! We also have many different types of marshes and wetlands, from freshwater waters that see essentially no tidal incursion, to rarely flooded high salt marshes and salt Meadows, to the low-lying coastal marshes that flood daily with every tide.

What actions can visitors to the Delmarva coast take to help support this important shorebird habitat?

Mike Hudson: As much habitat as we have on the Delmarva Coast, much of it is fragile and easily damaged. Simple things like staying on designated walking trails when visiting our region can be very helpful—many marsh birds build well-hidden nests well within the marsh and destroying or disturbing these nests is easy to do—as is properly disposing of fishing line and other waste generated by enjoying our coastal habitats. It’s also great to do things like learn about local conservation organizations and getting involved in their efforts. Many groups have fundraisers to help preserve habitat or engage in active habitat restoration efforts and those can be great ways to participate in an even larger way. Educating yourself on bigger-picture issues like climate change is also a good way to stay engaged and learn more about how our actions affect the world around us.

Many of the shorebirds that rely on our coastline are migratory. Is there a particular seasonal visitor you look forward to each year?

Mike Hudson: I don’t know that there’s any time of year I don’t enjoy visiting the Delmarva Peninsula! But it’s true that there are some times when activity peaks. The famous migration of the federally-threatened rufa subspecies of red knot peaks in mid-to-late May and coincides with the spawning of Atlantic horseshoe crabs and is a spectacle that everyone should try and see; the best time to view this event is usually around the full moon or new moon of May, whichever falls later in the month that year. But shorebird diversity peaks later in the year, during the fall migration. Late August and early September see flocks of hundreds of thousands of shorebirds descend on our region and as many as a dozen (or more!) species can be found on good days.

“Shorebirds: Avian Life on the Delmarva Coast” is sure to inspire us to get out and start birdwatching!  Any recommendations for observing shorebirds along the Delmarva coast?

Mike Hudson: We live in a great place for beginner birdwatchers! In the spring, a visit to the DuPont Nature Center at Mispillion Harbor Reserve is a great place to observe the red knot spectacle I mentioned earlier; Bombay Hook is another famous place for viewing shorebird migration and is best during the fall migration, which begins in mid-July and stretches through November. My best advice when starting out observing shorebirds is to be patient; shorebirds are tricky to observe when you’re starting out. Get a good field guide (Sibley and National Geographic are my go-to’s) and don’t get frustrated if it comes to you slowly. Just enjoy the spectacle and the rest will eventually come to you. There are also many great organizations that organize trips specifically around viewing and learning how to identify shorebirds; anyone starting out in our region should seriously consider looking into these groups, especially the Delaware Ornithological Society.

Let’s talk about native habitat restoration. You have been birding since you were 10 years old.  Over the years, have you noticed a positive impact on shorebird populations from restoration efforts?

Mike Hudson: This is a tough question because it varies so much from species to species and depends a lot on the habitat in question. Many species like piping plovers and least terns have definitely benefited from dedicated and intensive management of their nesting habitats in dunes and along barrier islands. There are some excellent success stories from the barrier islands along the Atlantic Ocean where the strategic creation and management of dredge-spoil islands and larger sandbars has helped prop up regionally rare shorebird and waterbird species. For some species the picture is murkier; salt marsh-nesters are among our most imperiled species and many are still struggling. Efforts to limit saltwater incursion and repair breaches that allow salty bay-water to flood habitats that rarely saw such severe flooding in the past have helped in some areas. Conservation organizations in the area are actively looking at how best to manage the changeover from fresher-to-saltier habitats to give fragile populations the best chance they have to adapt to coming sea-level rises.

What is the greatest threat to shorebird populations and the Delmarva coastal ecosystem?

Mike Hudson: In the long-term climate change; the combination of harsher and more frequent severe weather and steadily rising sea levels are already dramatically impacting many of our coastal habitats. In my lifetime I have seen many habitats turnover almost completely from brackish, or even mostly freshwater, to largely saltwater habitats.

Can you share an exciting bird sighting with us?

Mike Hudson: Oh my gosh, I’ve had so many! I’ll share an especially good one from several years ago when I was teaching at a camp for young birders; we were at Bombay Hook and I was teaching a field class on shorebird identification with several other local experts and we noticed many birds were starting to stream overhead from the direction of the bay. What was happening was the tide was changing and the birds that had been feeding on the mudflats were being forced into the freshwater impoundments by the rising tide. For close to an hour thousands of shorebirds filled the air around us, wheeling and spinning over the ponds before settling in to roost and wait out the high tide. We ended up seeing around fourteen species that day, including some fairly uncommon species, and the sight and sound of all those birds swirling around right overhead will still give me chills!