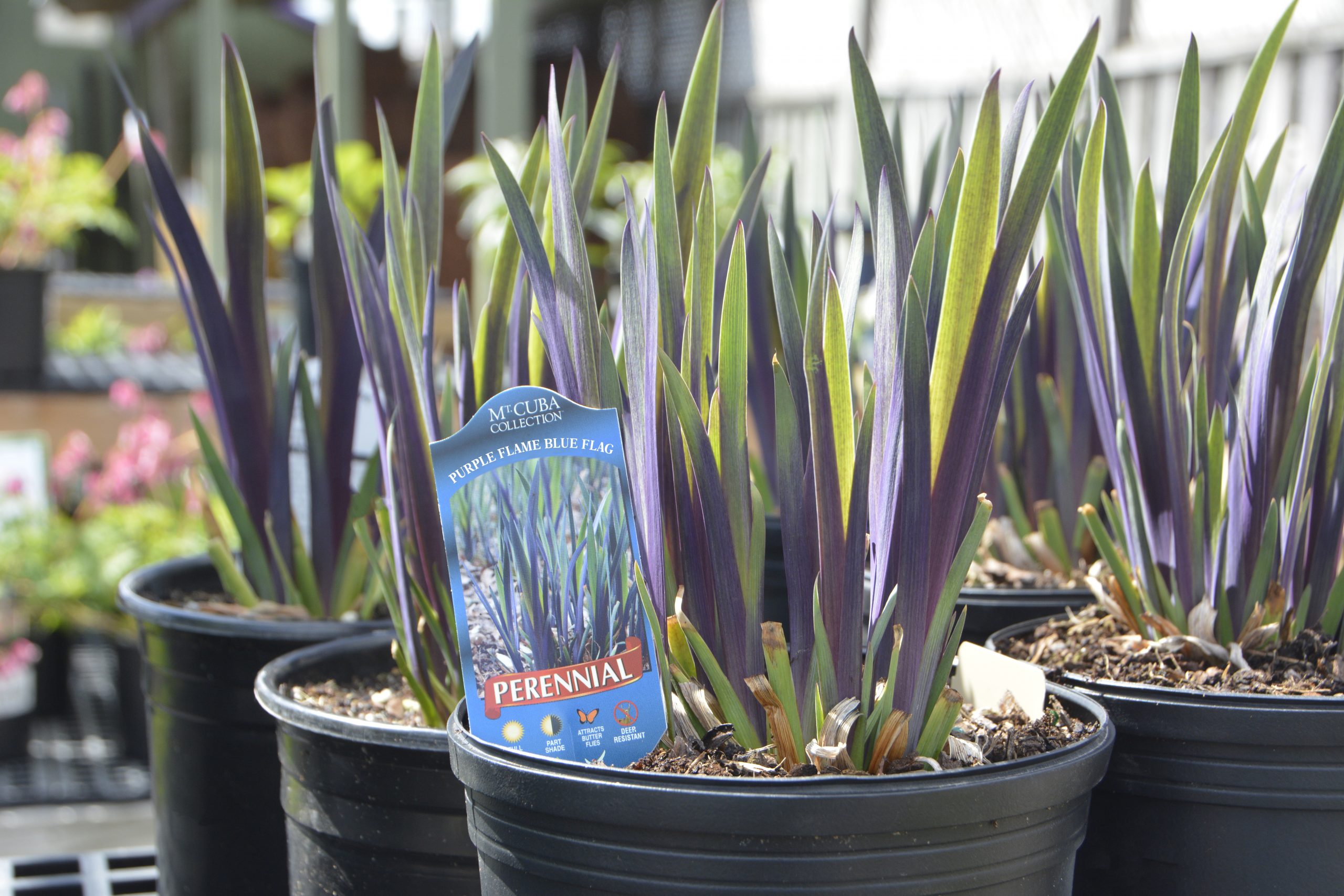 The Mt. Cuba Collection™ features a selection of exceptional native plants that provide stunning seasonal interest while welcoming wildlife into your garden. Selected for strong ornamental appeal and broad regional adaptability, many members of this collection have risen to become some of the most popular cultivars of native plants available.

Since 1988, Mt. Cuba Center has promoted the use of native plants in gardens. This tradition continues today, as we endeavor to select exceptional native plants, with an eye for ecological value and beauty, to increase their garden availability to the public.

Read on to learn more about the plants featured in the collection. 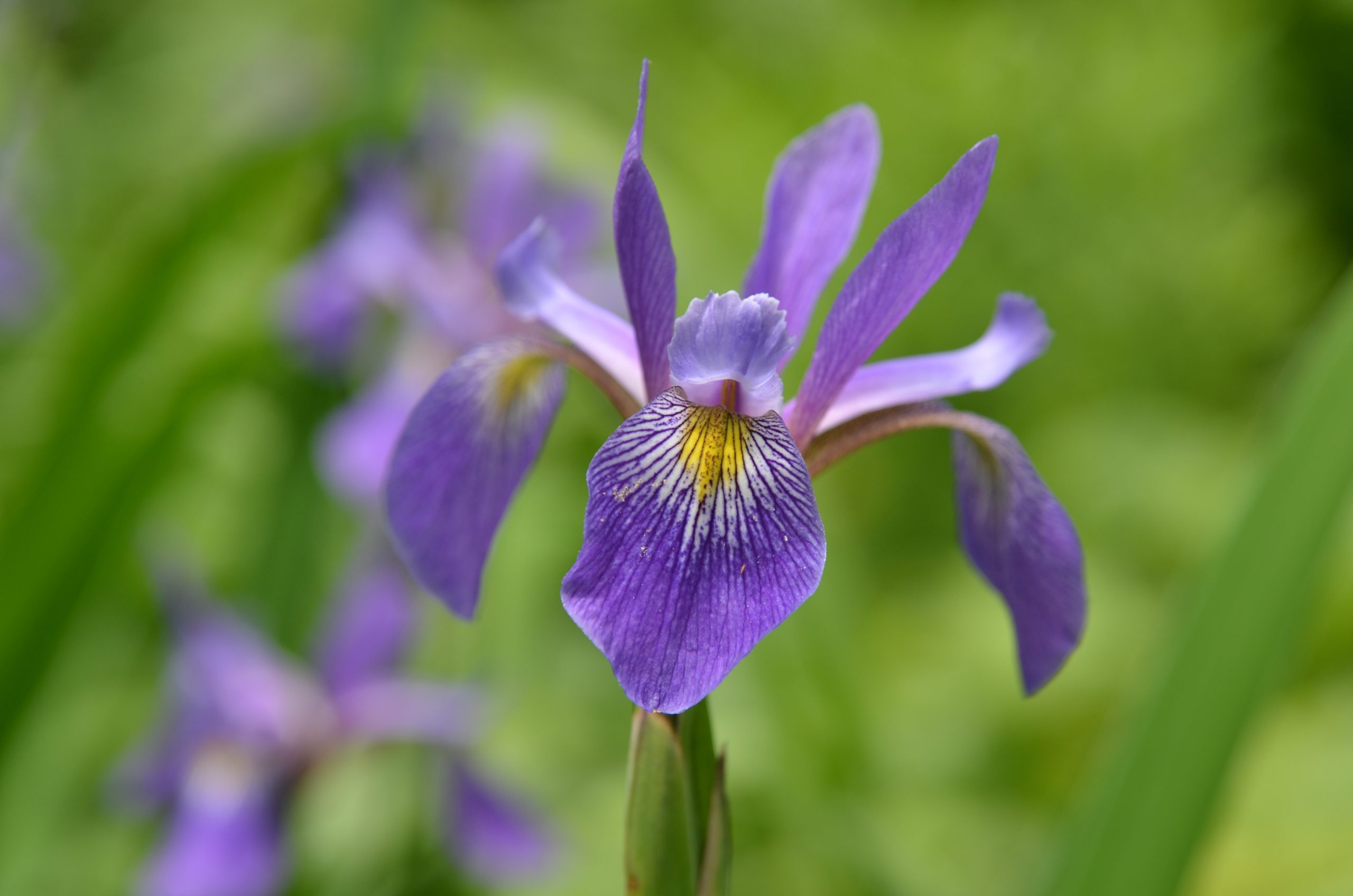 While it is similar in many ways to the typical native blue flag, Iris versicolor ‘Purple Flame’ sets itself apart when the eye-catching eggplant-purple foliage emerges in early spring.

As the season progresses, Purple Flame blue flag produces dark stems that display 3-4” showy, purple flowers with a splash of yellow color above the 2-3’ tall foliage. As the blooms begin in late May, leaves fade to more subdued tones of green.

Iris versicolor ‘Purple Flame’ grows well in wet-to-average soil in filtered shade and full sun. It is hardy from zone 3 to 9. 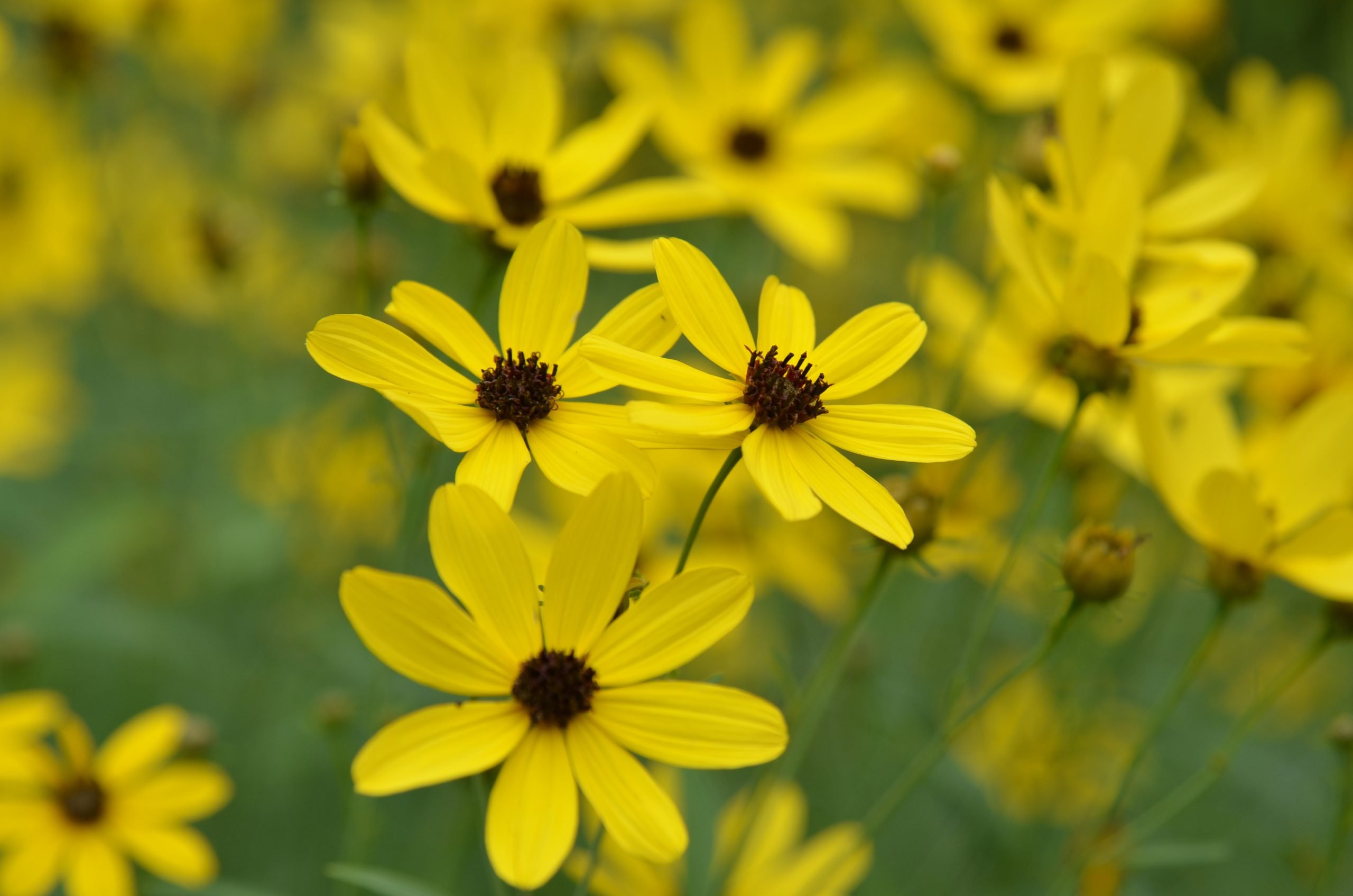 Beginning in late July, a multitude of sunshine yellow flowers appear above the robust, disease-resistant foliage. The floral display lasts for more than two months and the resulting seeds are a favorite among goldfinches. Coreopsis tripteris ‘Gold Standard’ is a rhizomatous cultivar that spreads slowly—approximately 2′ over three years.

This plant was collected from Jefferson County, Alabama, and was named and introduced as a result of its excellent performance in Mt. Cuba’s coreopsis trial. 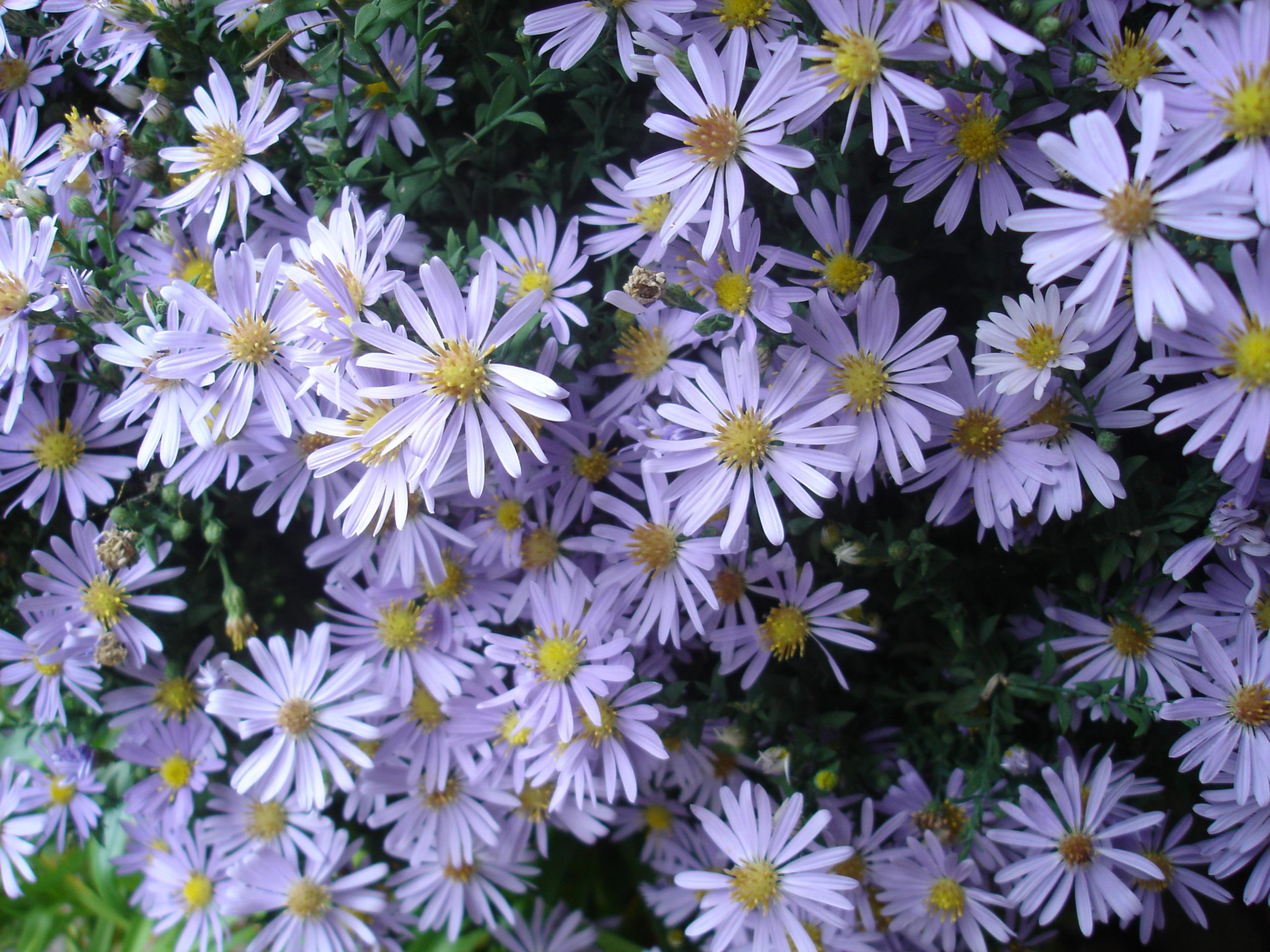 It was found in 1988 in a Guilford, Connecticut, garden as a spontaneously occurring seedling. It has an upright habit to 4’ tall and generally needs no staking.

Symphyotrichum laeve var. laeve ‘Bluebird’ blooms in September and October in full sun to light shade with a broad tolerance of soil types and moisture levels. 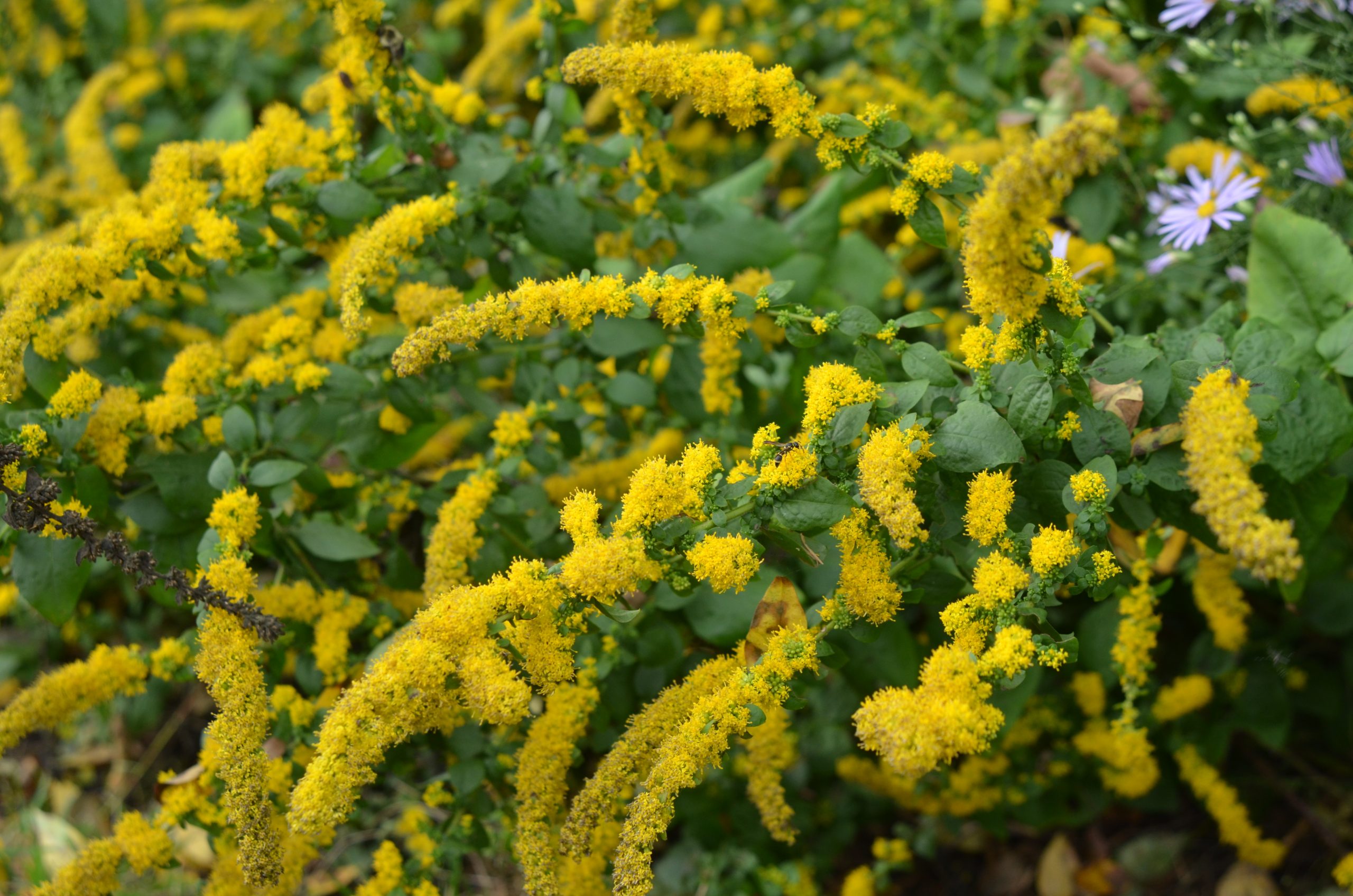 Solidago sphacelata ‘Golden Fleece’, or Golden Fleece autumn goldenrod, was discovered in 1985 as a spontaneous garden seedling in Eden, North Carolina. It was evaluated under diverse conditions at Mt. Cuba and determined to be a low-growing, compact form of the species.

Growing only 18″ tall, it is suitable for use as an herbaceous perennial groundcover. Multi-branched stems arise from basal rosettes of broadly rounded foliage and are covered with a profusion of golden-yellow floral spires from mid-September to October.

It performs best in full sun with average moisture but is tolerant of a range of conditions from sunny and dry to partial shade. Solidago sphacelata ‘Golden Fleece’ is hardy in zones 3-8. It won the Internationale Stauden-Union’s Award for an outstanding new plant in Switzerland in 1994. 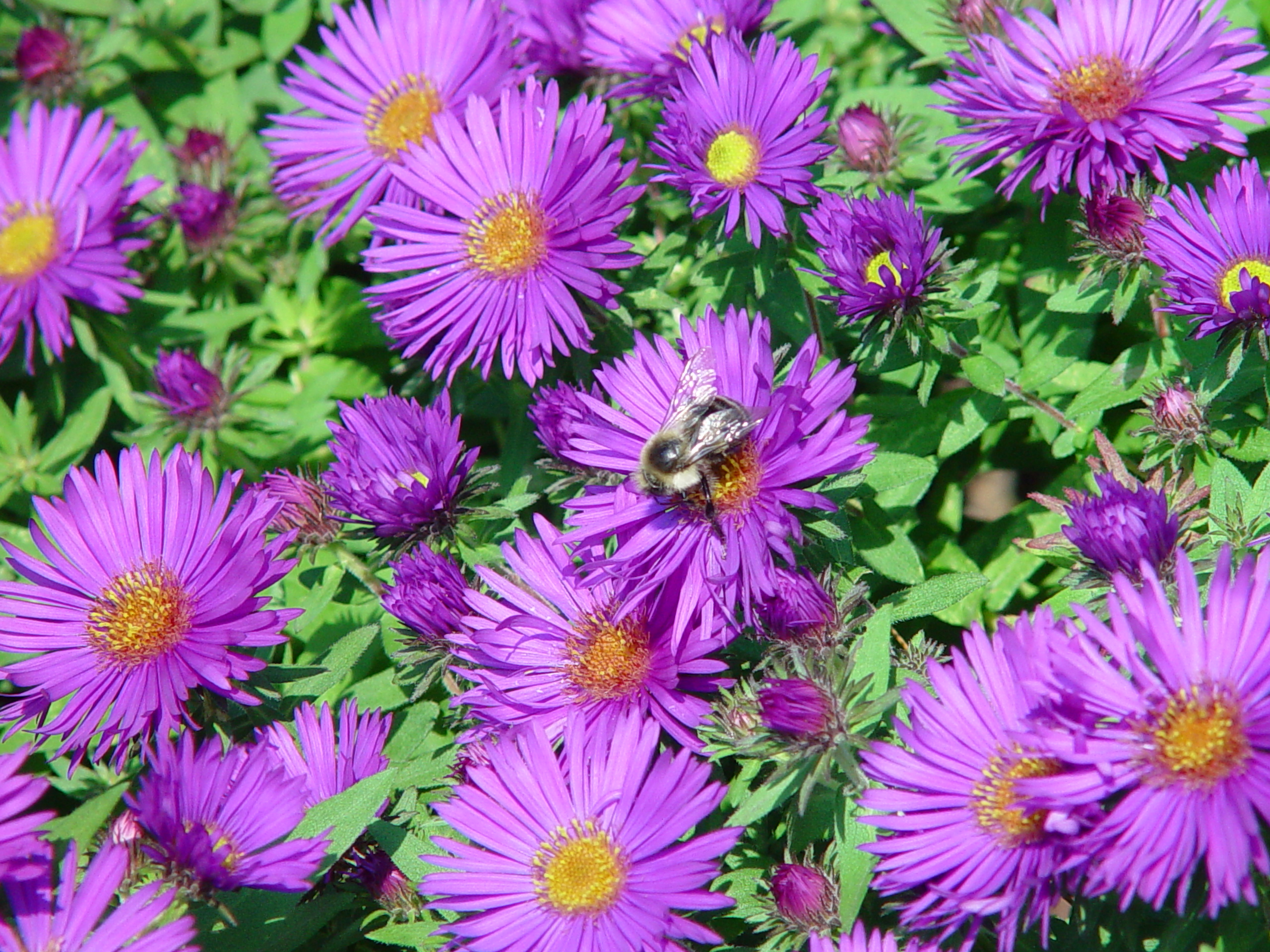 Its dense floral display and short stature minimize its lack of resistance to foliar problems. Symphyotrichum novae-angliae ‘Purple Dome’ was first observed along Pennsylvania Route 100 below Allentown, Pennsylvania, by Robert G. Seip of Lennilea Farm and given to Mt. Cuba.

It performs best in full sun to light shade in moist, well-drained soil.

Where to find the Mt. Cuba Collection

Get Your Hands Dirty