Have you ever wanted to attract more butterflies to your garden? Mt. Cuba Center is embarking on a new project to do just that. Earlier this spring, Mt. Cuba Center began a new study on phlox, a floral highlight of the mid-Atlantic summer. This bountiful perennial has clusters of small flowers that bring color, fragrance, and the promise of butterflies to your backyard.

“Phlox is considered one of the greatest American perennials,” explains Keith Nevison, a Fellow in the Longwood Graduate Program who studies phlox. Early explorers seized it and began to breed it in Europe, as early as the 17th century. “Today, horticulturists have discovered or created hundreds of new garden varieties, or “cultivars.” New cultivars have been bred for improved color and disease-resistance. These may look wonderful in your garden,” Nevison says, “but they raise a number of ecological questions.” 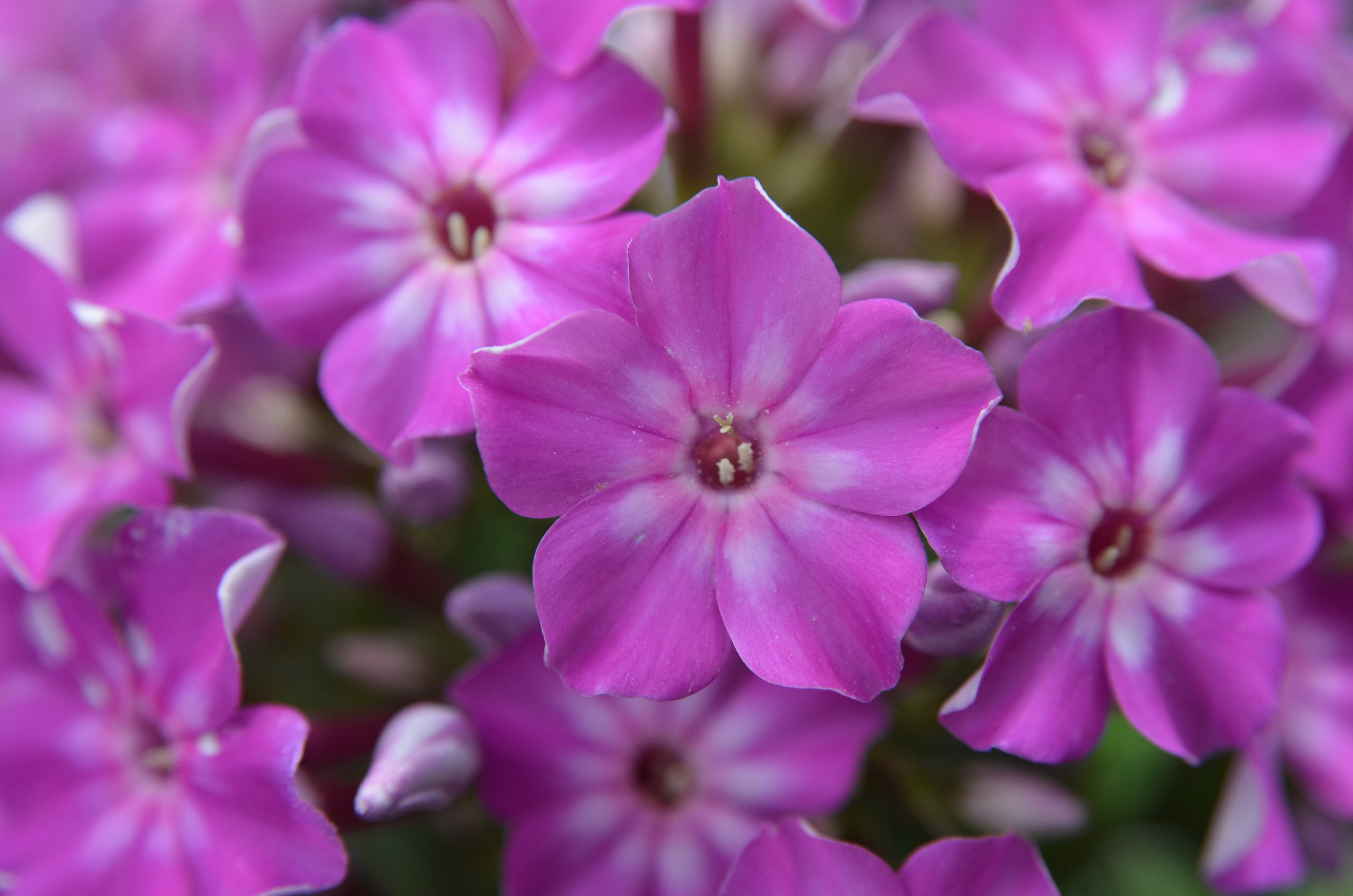 Phlox, he notes, are only pollinated by butterflies and moths, which use the flowers’ nectar as a food source. Any impact these new phlox cultivars have on pollinators, however, is not yet understood. It is unclear if new cultivated varieties of phlox provide the same level of nutrition for those insects as varieties found in the wild. It is similar to eating apples that were bred for improved color but have lost some of their taste.

“We are now paying attention to ecological qualities,” explains George Coombs, Mt. Cuba Center Research Horticulturist. “The goal of our research is to inform gardeners and the nursery industry about an important but overlooked set of criteria to consider when selecting a plant—in addition to color and ornamental traits.”

Coombs oversees the plant evaluations, which center on the long-term performance of the plants. Mt. Cuba Center’s phlox evaluation encompasses the qualities of ornamental value, disease resistance (see side bar), and ecological value. Data collection over a three-year period will result in a list of top phlox performers for the mid-Atlantic region. This is the biggest plant trial yet at Mt. Cuba Center, with over 140 varieties, and is an opportunity to highlight species that are currently undervalued. “We encourage visitors to walk through the trial garden and see what they like and be inspired to try a different plant in their own garden,” says Coombs.

Nevison’s ecological research builds on Mt. Cuba Center’s study. In conjunction with the University of Delaware and the Mt. Cuba Fellowship Program, several similar research projects are taking place in the trial garden and grounds at Mt. Cuba Center. Nevison is studying how nutritious and beneficial phlox is to its pollinators. “Phlox was one of the first plants to be identified with a dependency on a specific type of insect for pollination to occur (called an obligate pollinator), making the relationship between plant and pollinator very significant,” he explains. In this case, moths and butterflies are the only insect group able to pollinate it. The flowers are too narrow for hummingbirds and too long for bees to enter.

Nevison is specifically focused on the nectar content and quality for pollinators. Just like a butterfly or moth, he visits the Trial Garden several times a day, at least three days a week to collect the plants’ nectar and assess its volume and sugar content. His research also includes an analysis of the actual nutritional value. We will be able to evaluate whether wild species differ from cultivars on this really fundamental level,” he explains, “and determine whether some cultivars are superior to others in their ecological value.”

Growing a beautiful garden means also providing for the pollinators that thrive there too.Once the phlox study concludes, researchers at Mt. Cuba Center will be able to recommend excellent phlox selections. “If nurseries seized the opportunity to promote a diversity of native, disease-resistant varieties, they could showcase beautiful, hardy, and potentially popular plants for both gardeners and pollinators,” says Nevison.

Visit the Mt. Cuba Center trial garden for inspiration and check local garden centers, such as Gateway Garden Center in Hockessin, DE and Red Bud Nursery in Glen Mills, PA, to find a diversity of phlox for your garden. 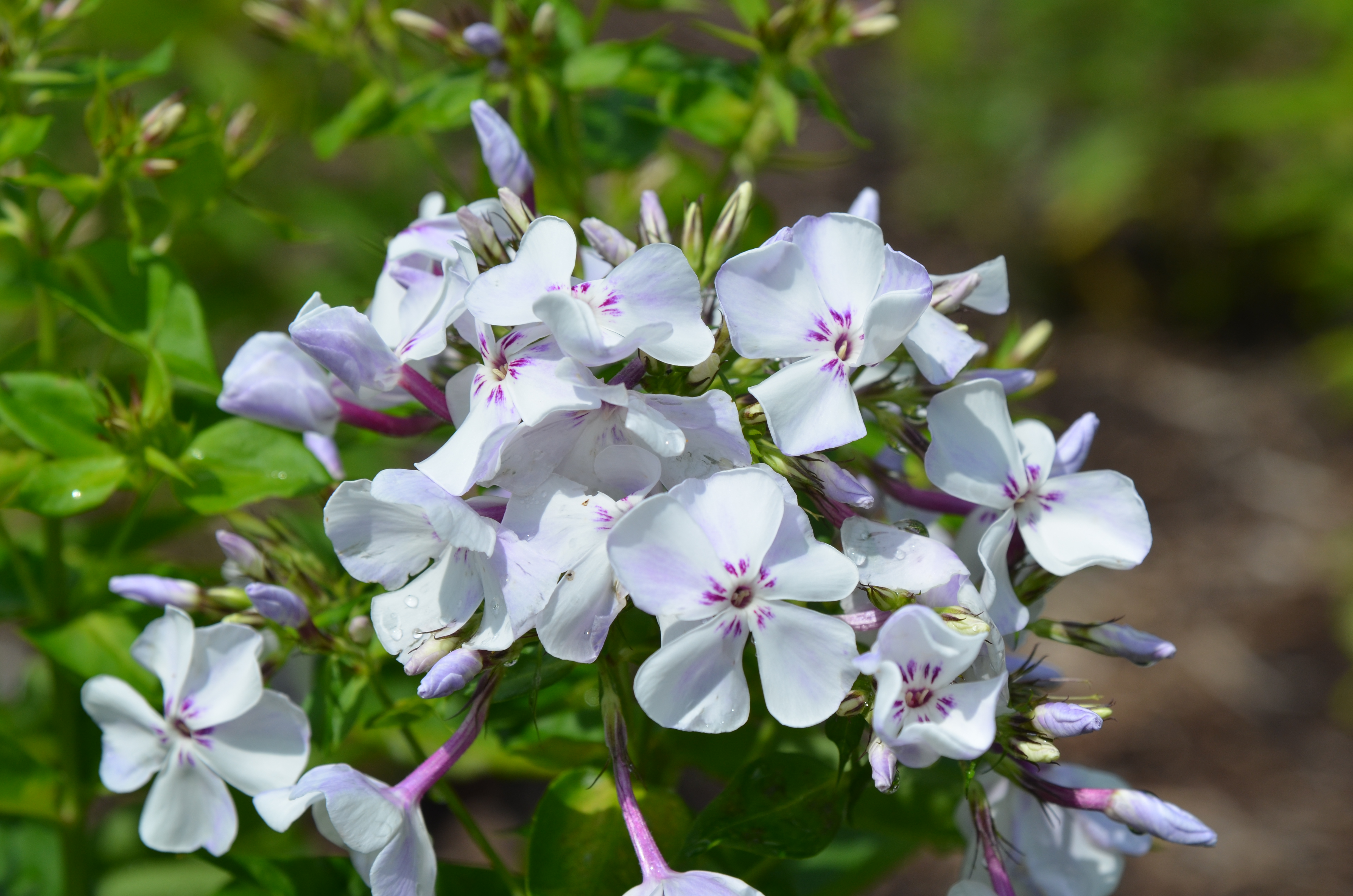 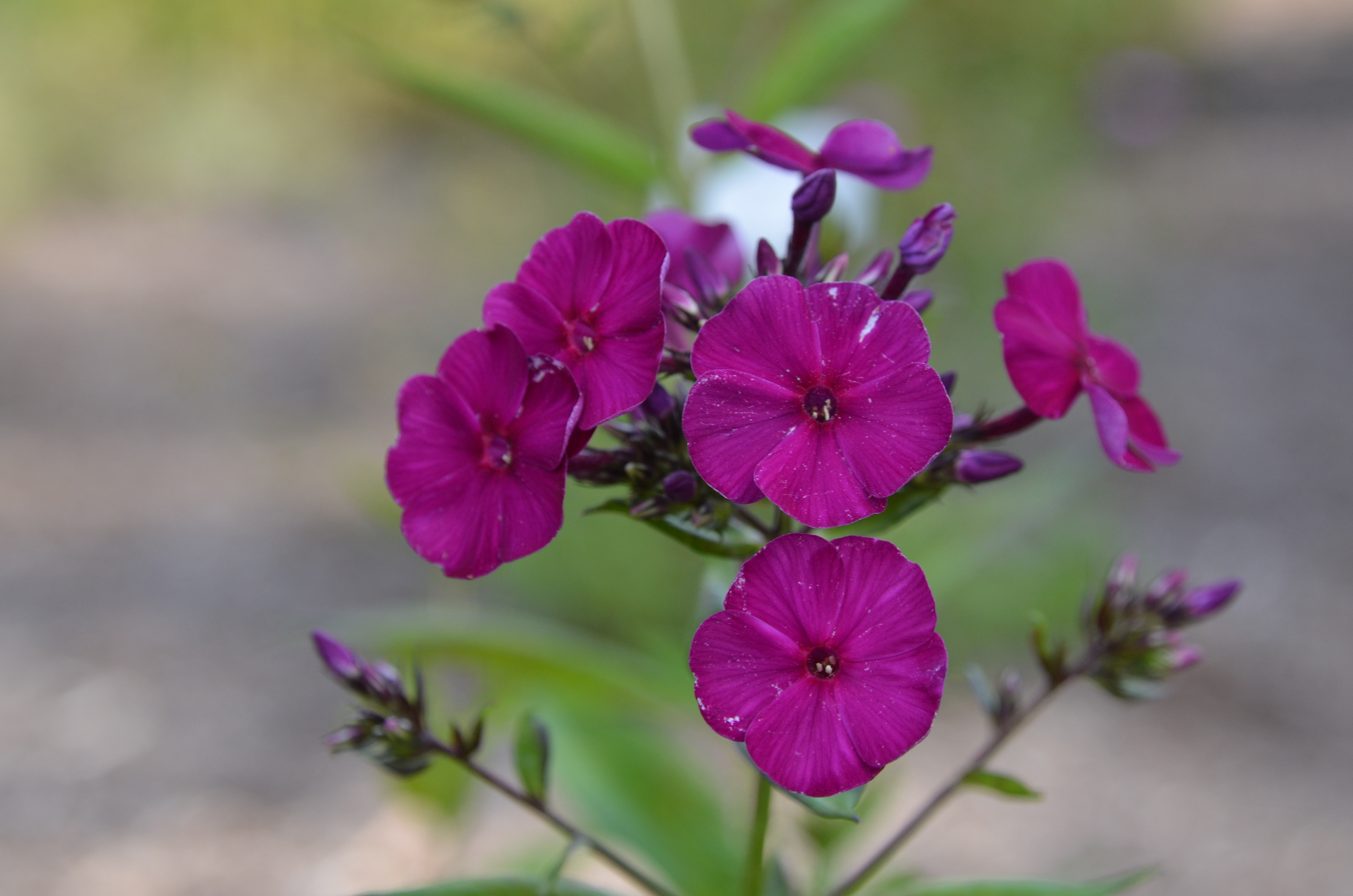 Many popular cultivars are derived from a common parent plant—Phlox paniculata, which is innately prone to powdery mildew. Therefore, many of its cultivars are susceptible to the fungus as well. Powdery mildew is a fungal disease that appears as a whitish fuzz or haze on the leaves and stems of many different plants. This fungus is ubiquitous in the environment and requires only proper weather conditions to develop. Powdery mildew develops in periods of warm, dry weather and does not require high humidity to initiate an infection. The humid conditions most people associate with the development of powdery mildew are only required for the formation of spores which allow the fungus to spread to nearby plants. However, once the spores have contacted susceptible foliage, the disease can develop quickly. While powdery mildew is usually only a cosmetic nuisance, severe cases can cause defoliation. The disease is often host specific- so the type of powdery mildew on your phlox is not the same type on your bee balm. Therefore, it typically only spreads among closely related plants. 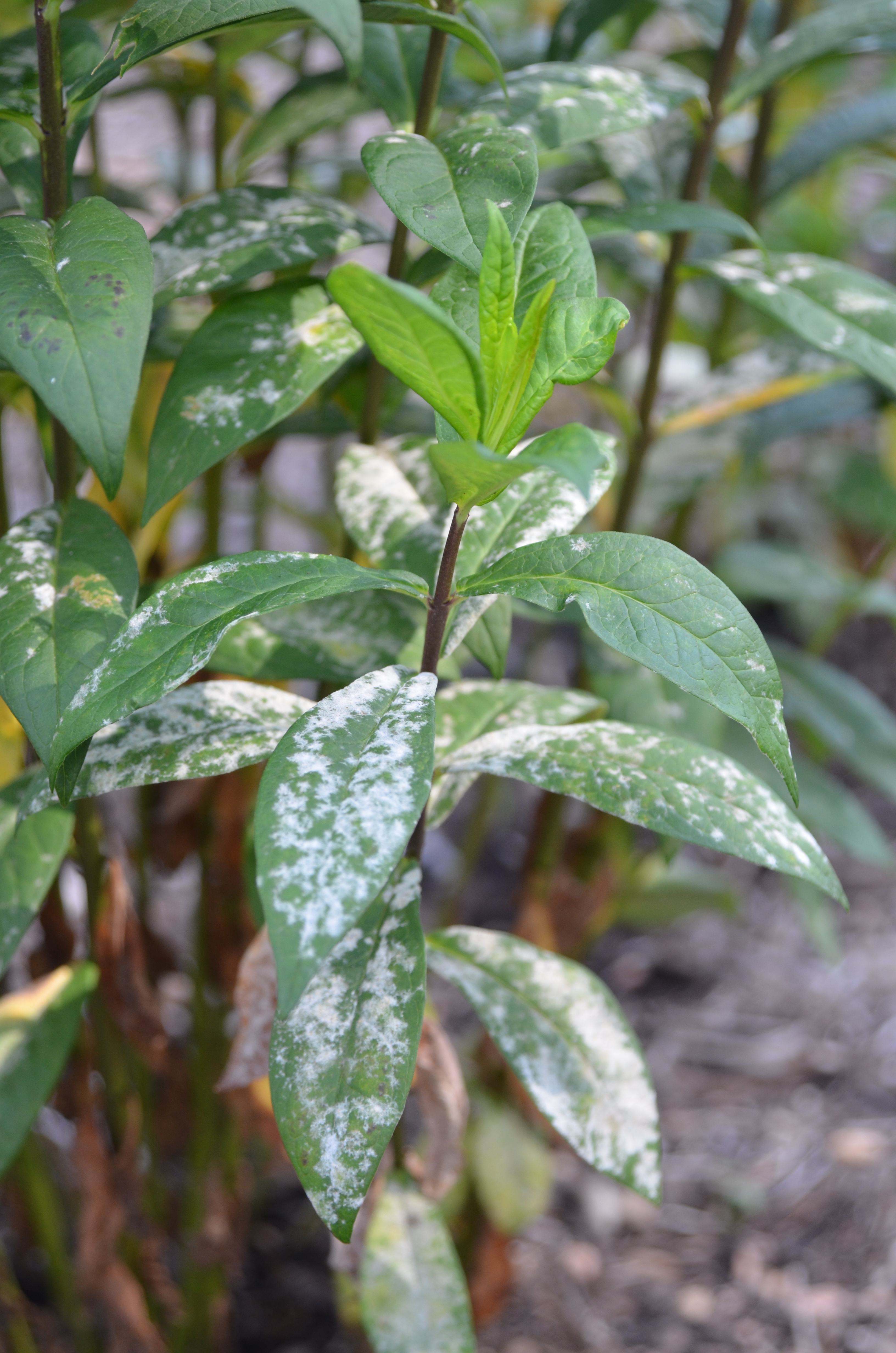 How To Treat It:

Plants under stress are more likely than others develop powdery mildew. Positioning your plants correctly is the first line of defense. Phlox prefer consistently moist soils, so at planting, be sure to amend the soil with compost to help maintain moisture levels. Providing good air circulation is also one of the best ways to prevent powdery mildew from occurring. If the fungus does develop, there are several fungicides available to home gardeners. Some popular organic controls are sprays comprised of horticultural oil and baking soda, or milk and water.