The functionally extinct tree seems to want to come back. American chestnut trees that have died back to the ground can sprout new growth from the base of still-living roots; however, the new shoots succumb to the blight before reaching maturity. 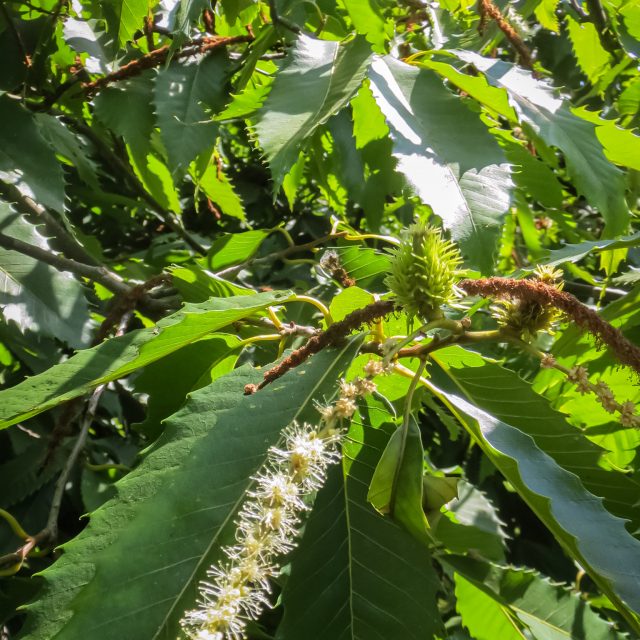 Mt. Cuba grows chestnut trees from seeds for Tyler Arboretum and other TACF affiliates. Chestnut seeds harvested from Tyler Arboretum’s TACF orchard are considered to be pure American, as they use controlled pollination methods to pollinate the flowers with other pure American chestnut pollen.

“The Tyler orchard is a germplasm preserve and the intent is to conserve the biodiversity of the American chestnut tree until a successful strategy to overcome the chestnut blight can be found,” says Dan O’Keefe, Tyler’s chestnut orchard volunteer leader.

The germination process begins at MCC in late winter, when Shelby French, MCC’s Propagation Manager, receives a batch of seeds. These often have a developed radicle (embryonic root) and are ready to be potted. Greenhouse staff use an acidic greenhouse potting media, placing one seed per pot in a slender tree band container, designed for the developing radicle. The pots are placed inside a warm, shaded greenhouse, where in a few weeks the seed sprouts a shoot. After two months, the tree seedlings are moved to a greenhouse with more light. 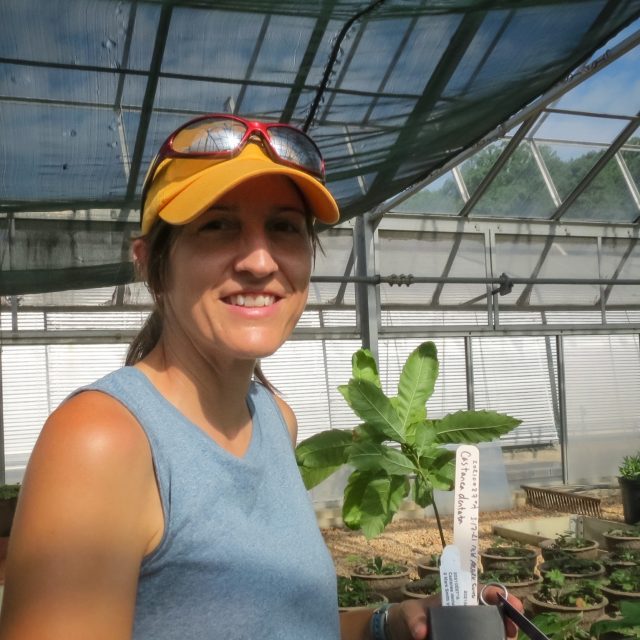 Eventually, saplings will be potted into larger RootMaker® containers specifically meant for taprooted species to prevent girdling (circling) roots. The containers are placed in a hoop house covered with shade cloth to protect the young saplings from full sun conditions. The saplings will remain in the hoop house until the following spring, when TACF volunteers will collect the carefully tended, healthy trees ready for transplanting outside. 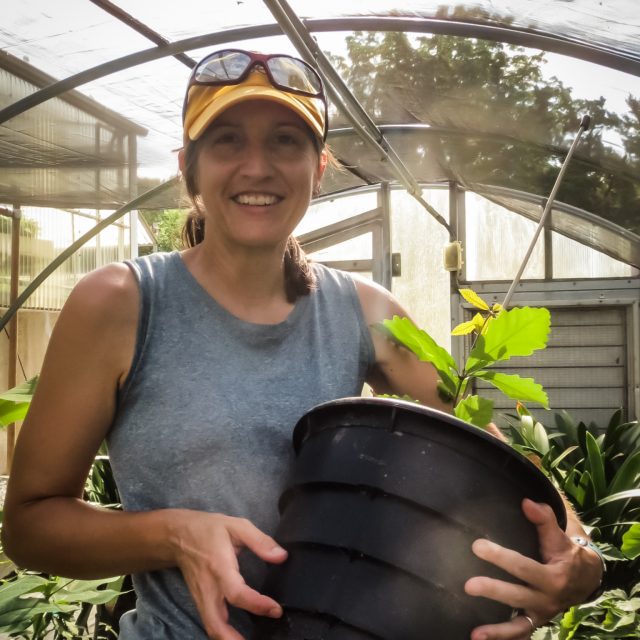 The backcross orchard was started in 1999, says Sara Fitzsimmons, director of restoration for TACF. Close to 1,000 hybrid trees were planted over the course of five years, she says. Steve Hands, Red Clay supervisor, and his father planted the hybrid seeds from Penn State’s orchards.

Twenty-two trees from the original plantings remain in the orchard. The remaining ones, used for breeding, showed the best form and best resistance to the blight. All their progeny are sent to Penn State, says Fitzsimmons.

In 2017, 856 hybrid seedlings from Penn State were planted in the backcross orchard, says Hands. The seedlings represented about 30 different lineages from different places. The purpose of the 2017 planting is to see how the new trees do in Delaware, says Fitzsimmons.

TACF returns to MCC yearly to check on the orchard. In the fall they harvest the nuts. At other times, they inspect for blight and take and record measurements.

The backcross orchard at MCC is one of the best orchards Fitzsimmons has seen. “The selections there (from the original plantings) have performed as some of the best and survived the longest in the program.”

Bill McAvoy, Delaware state botanist, confirmed that the tree is indeed a healthy Castanea dentata that was about 50 years old at the time.

Eric Kelley, MCC arborist assistant, climbed the tree on July 6, 2020, and collected pollen. The tree, growing in an old hedgerow, was difficult to access, says Kelley. “Climbing the tree was simple,” he added.

He went up about 35 feet and sat on a branch with most of his weight on the climbing line. He took extreme care to not harm the tree. With a 16-foot pole saw, he reached to the end of the branch and pulled the pollen-laden tip to himself. Kelley collected over 50 catkins (the flowering spike of trees).

The pollen was taken to Tyler Arboretum, where it was used to pollinate trees in Tyler’s TACF orchard.

Mt. Cuba’s conservation work on the American chestnut is just one of many ongoing projects. Find out about more projects here.