Have you ever come across the ghostly white stalks of the wildflower Monotropa uniflora, commonly known as ghost pipe? Oh, how exciting it is to suddenly come across this plant emerging from the leaf litter in the darkest areas of a forest!

At a glance, it is easy to assume Monotropa uniflora is a fungi, when in reality it is mycotrophic, meaning it utilizes mycorrhizal fungi to tap into the root network of nearby trees to find nutrients and water. It acts as a parasite to soil mycorrhizal fungi, which conversely parasitizes the roots of nearby trees, resulting in complex nutrient webs. Ghost plants do not contain chlorophyll and do not produce their own energy from photosynthesis, making them fully dependent on their fungi hosts and, as a result, nearby trees. 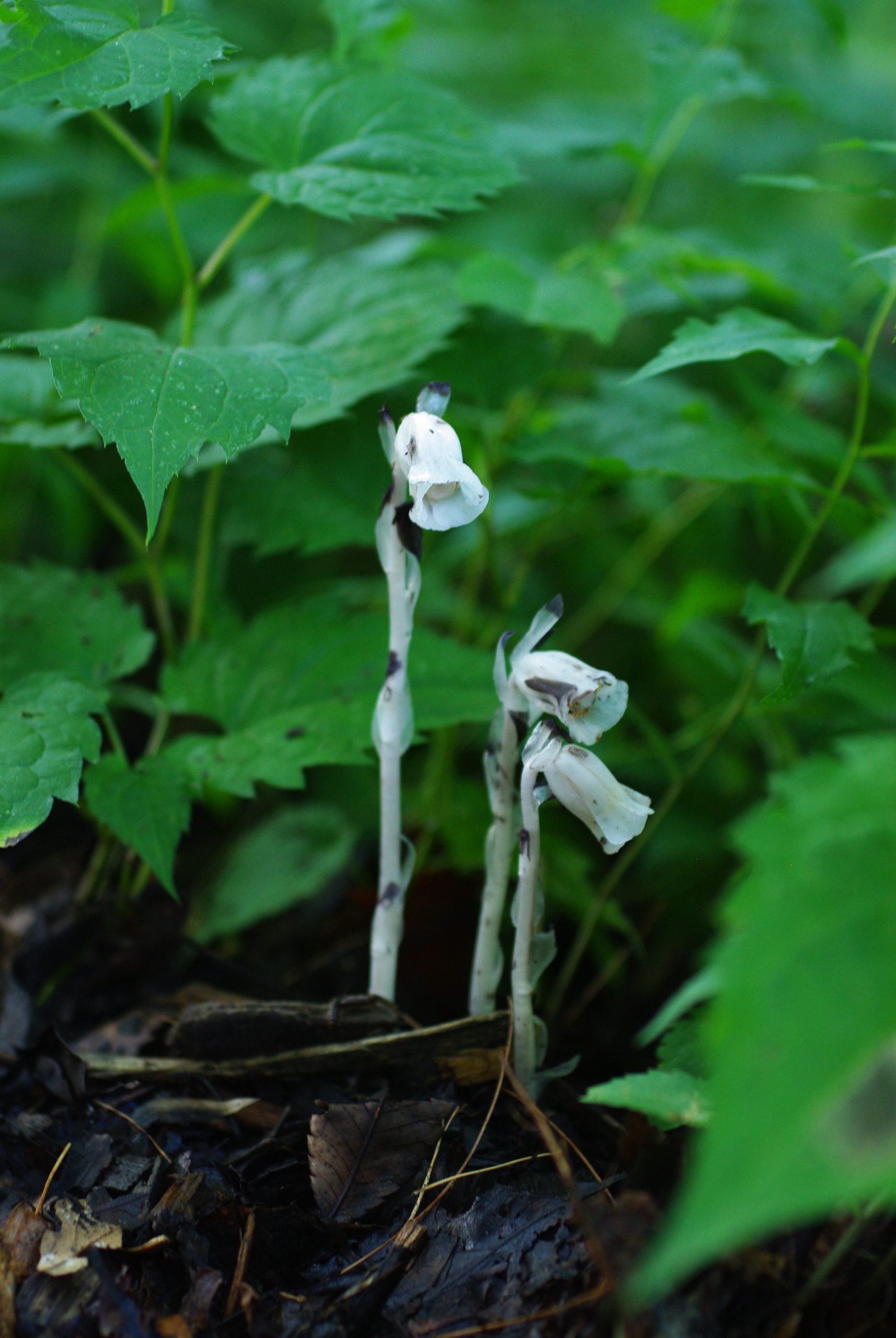 Sprouting up seemingly overnight, ghost plants bloom randomly from summer to early fall. At Mt. Cuba Center, a rainy July weekend followed by true summertime heat seemed to stimulate ghost plant growths all over the garden in the deepest of shade; along mulched pathways and underneath bottlebrush buckeye (Aesculus parviflora) colonies.

Stumbling upon it woke me up from a “weeding trance,” causing me to pause and admire its haunting beauty. Despite only growing less than 8” tall, the black-speckled white ghost plant stalks are truly striking when seen up close. The single flowers, pollinated by bumblebees, are bent like a bell, later turning upwards as the seeds ripen and the plant dries. I have come across this plant long after it has died back to the ground for the season, leaving behind remnants of dried flower stalks frozen in time within the humus-rich forest floor.

While at Missouri State University, I spent time studying the growth of another parasitic plant, Aureolaria grandiflora, or large flowered false foxglove. Unlike Monotropa uniflora, Aureolaria grandiflora is a heterotrophic hemiparasite, meaning it only partially depends on its host roots and contains chlorophyll, allowing it to produce energy from photosynthesis.

Related to the ghost plant is Monotropa hypopitys, commonly called pinesap, which can also be found throughout North American forests. It is reddish to yellow-pink in color and stands similarly high on the forest floor. I have seen this in bloom in late summer on a dry wooded ridge where the predominate tree canopy was in Juniperus virginiana (eastern red cedar) and variety of upland Quercus (oak) species. 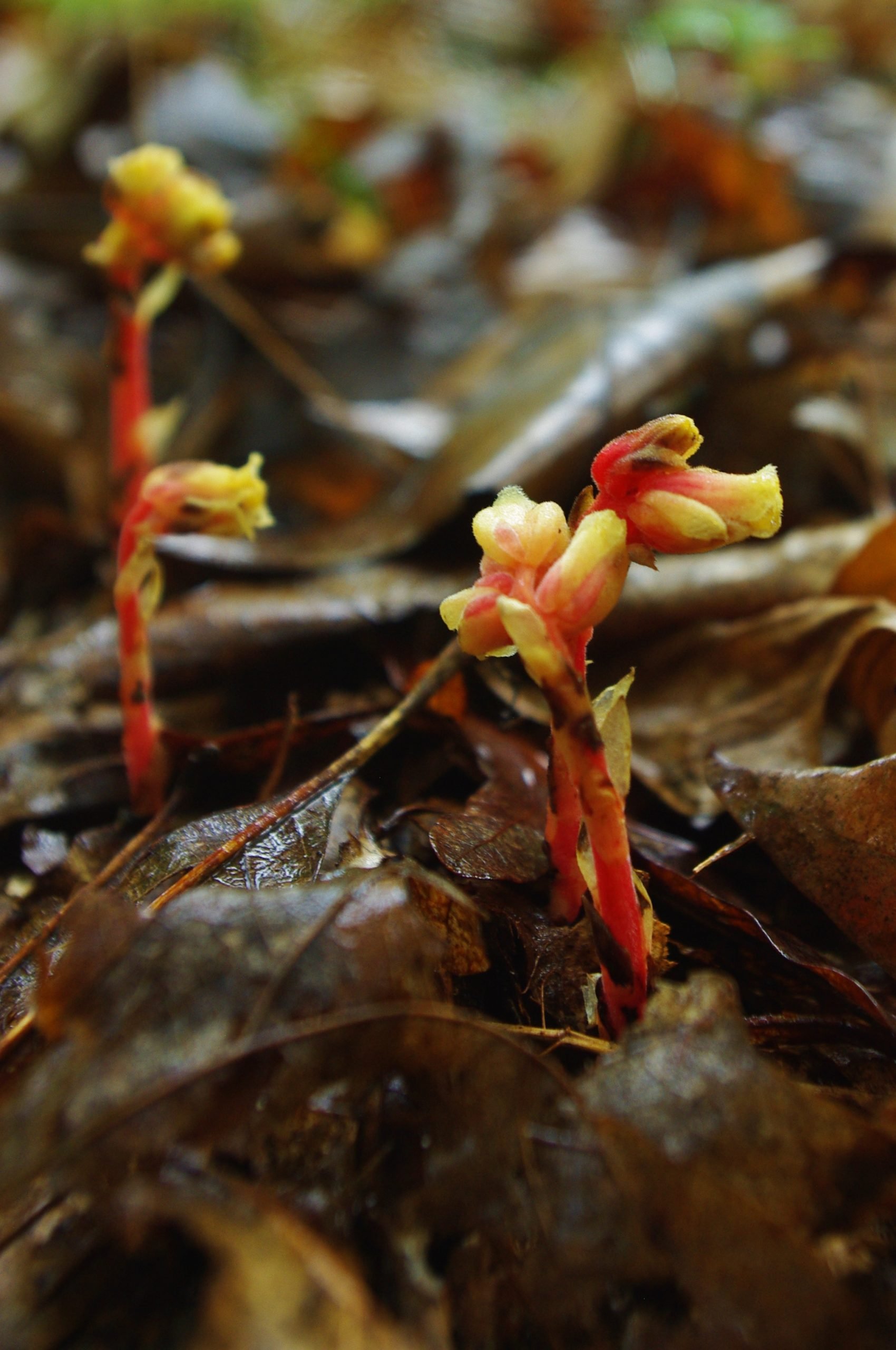 Image 2: An image of the red and yellow blooms of Monotropa hypopitys.

I find the world of parasitic native plants fascinating. Although the word “parasitic” often conjures up negative thoughts, native parasitic plants are an important part of woodland ecosystems. Some even increase plant diversity in an ecosystem by decreasing the competitive advantages of their host plants.

If you are hiking a woodland trail this fall or next summer and come across a ghost plant or a pinesap, stop to admire their ghostly beauty and the complex relationship they have with other organisms in the forest soil food web.

Patrick Greenwald is the Senior Horticulturist for the Meadow and Dogwood Path gardens at Mt. Cuba Center. He has an MS in Plant Science from Missouri State University and a passion for native plants of eastern North America. Specializing in matrix gardens, he loves to increase diversity in garden design through naturalistic native plantings. His personal mission is to inspire fellow nature advocates and gardeners, one garden at a time.